They can't believe it's Buddha

Kathmandu, Nepal -- Nepal's "Buddha boy" is under investigation by the authorities, who question his claim not to have eaten anything for six months and are examining his followers' finances. 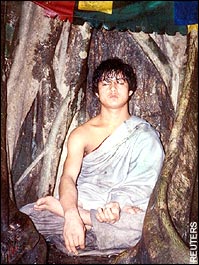 << Ram Bomjon claims not to have eaten for six months

The government believes that Ram Bomjon, 15, may be breaking his fast to eat at night when his shrine is closed to visitors.

Buddhism experts, the interior ministry and Nepal's leading scientific agency have all been called in to investigate the phenomenon, which has attracted thousands of pilgrims and excitement worldwide.

"We told the shrine management committee, 'Either we need to see everything that is going on or, if this is a fraud, you need to close it down,' " said Hari Har Dahal, a local official. "This has got into the media all over the world. If it is not true, it will be bad for the country."

The way donations to the organising committee have been spent has also been questioned.

Hundreds of pilgrims were still entering the jungle near the village of Ratanpuri to see Ram this week, despite the authorities' attempts to discourage the faithful from visiting the site.

"We stop from village to village and people are really keen to come," said Amit Bartola, a bus driver, who had 80 people crammed on to his 36-seat bus.

All the pilgrims The Daily Telegraph spoke to said they believed the claim that Ram had eaten or drunk nothing for six months. The scene's popularity is partly becuase of its resemblance to an episode in the life of the Buddha, born nearby in around 543 BC. The Buddha achieved enlightenment after meditating under a sacred pipal tree for 49 days, a feat of endurance allegedly surpassed by Ram. The boy is sitting under a pipal in the same pose as the Buddha.

Ganga Jeet Bomjon, Ram's elder brother, strongly rejected accusations of cheating. "The investigators say that you guys are doing something - feeding him batteries to give him energy or something," he joked. "But you try sitting with your legs crossed for three hours, never mind six months."

The management committee, mainly composed of young men and teenagers from Ram's village, stands by its claim that the teenager has eaten and drunk nothing for six months. But it has resisted intensive scrutiny.

"I don't mind people coming to check," said Ram Krishna Tamang, a committee member. "But they can't touch him and break his meditation."

Local officials have demanded to see the committee's accounts and have been told that it has received the equivalent of £6,311, a vast sum in Nepal where the average income is around £120 a year.

The committee says that £3,375 is left after the rest of the money was spent on running the site. The authorities want to know in more detail how the cash was spent.

The authorities say they must proceed with care because the issue is religiously sensitive. But there seems little chance that they will drop the case. They are also pressing for tests on the boy and 24-hour observation.

The policeman on guard outside the office where Ram's file is kept gave a clue to the mood at the administrative headquarters.

"He has to eat; he has to drink water," he said. "If we find out that he is lying, he and the rest of them are going to jail."