The little Buddha of Bara

Kathmandu, Nepal -- Braving the cold wave in the Terai that has already claimed dozens this winter, Ram Bahadur Bomjon, known as the Buddha Boy, is continuing his meditation wearing just a thin cloth. Eight months have already passed since he began his "deep meditation" but the confusion whether he has really not eaten or drunk anything during this period is still unresolved. It has been claimed that the 16-yr-old has not drunk even a single drop of water since he began his meditation on May 17, last year. 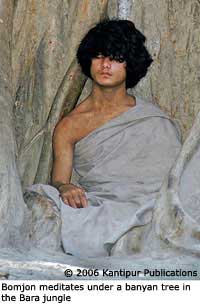 'The biting cold has had no effect whatsoever on him so far," says priest Prem Lama, who is also Bomjon's maternal uncle and the only person having close access to Bomjon, "He, however, looks thinner."

"He had short hair and a muscular physique when he sat under the Banyan tree," says Resham KC, who has been capturing the meditating "Buddha Boy" in his movie camera for the last eight months, "(Now) his hair has grown down to the tip of his nose and his body has thinned."

"Had it not been for a godly power, this biting cold would have already killed the boy," says 72-yr-old Babulal Syangtan who arrived at the meditation site for the seventh time with rations and other daily necessities enough for 100 days.

People from different walks of life started pouring into the meditation site since last October after Bomjon got publicity as the re-incarnation of the Buddha. Millions have visited the site so far. The locals have also formed a committe- the "Om Namobuddha Tapoban Protection Conservation Committee"- headed by one Bed Bahadur Thing for the management of the meditation site in the Bara jungle. Thing says the committee had to be formed for the protection of the meditating boy as he himself said before beginning his mediation that he needed to meditate for six years to reach Buddhahood. "We had to come forward to provide protection as some miscreants tried to disturb him by making noises and poking him with a stick," explains Thing. 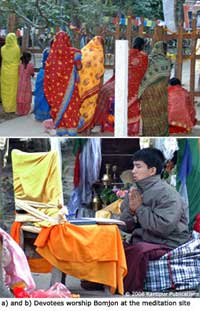 The meditating boy became a headache for the local administration after tens of thousands of people started thronging the meditation site. Security sources say a large portion of the money and other offerings made at the meditation site and the amount collected from selling Bomjon's pictures, CDs and biography goes to the Maoists. "We have received information that 75 percent of this income reaches Maoist hands," claimed a security official on the condition of anonymity, "This is the main reason why the general public is discouraged from visiting the meditation site."

However, Thing, who claims that the committee has not given a single penny to the Maoists, says both the security forces and the Maoists have been asked to accept the meditation area as a zone of peace.

Chief District Officer (CDO) of Bara, Shanta Raj Subedi says the district administration had to take this decision as settlement and business activities are prohibited in the jungle area. CDO Subedi also complains that the committee violated the decision and lifted the screen around Bomjon and also did not furnish the income-expenditure details and the name list of the volunteers working on the meditation site.

Chairman of the committee, Thing, however, explains that he had to remove the screen because of the mounting pressure from the visitors. "We could not keep him (Bomjon) behind the screen after thousands of devotees insisted on its removal," Thing said. 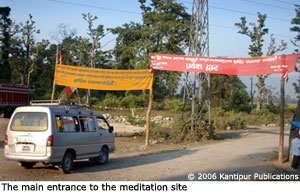 An eight-member team of health workers headed by the district hospital's Medical Superintendent Ram Lakhan Shah had observed the meditating boy for half an hour on November 14, 2005. The medical team that made the observation from a distance of five metres concluded that there was no doubt that Bomjon was alive and suggested that they needed to observe him for at least a week to reach any comprehensive conclusion. During the half hour observation the medical team noticed Bomjon breath three times, swallow his saliva once and move his eyelashes. "Even if he eats at night, it is extraordinary to continuously meditate in the same position for 12 hours a day," Dr Shah said. One reason for Bomjon's ability to meditate for long periods could be due to yoga, he guessed, adding, "He needs to be thoroughly examined since his case has thrown up a challenge to medical science."

A member of the team, Dr Raj Dev Kushwaha said, "Just by examining the glucose level in his blood, it can be easily found out whether he has eaten or not." However, any physical examination of Bomjon is not acceptable to the committee. "We will not allow, at any cost, any examination that involves touching or piercing since it will disturb him," Thing argues.

The district administration on November 16, 2005 had written to the Royal Nepal Academy for Science and Technology (RONAST) and the Lumbini Development Trust (LDT) to carry out Bomjon's medical examinations. Indeed the LDT and the Tribhuvan University Institute of Medicine did carry out an observation at the site. "Perhaps because they too could not come up with a comprehensive report; there was no response," says CDO Subedi.

Two months back, a seven-member team headed by a Rimpoche from Pharping Monastery also observed Bomjon. A highly experienced Yoga practitioner himself with six years of meditation experience, the Rimpoche had said back then that Bomjon could not be taken as a Buddha, adding meditation was nothing extraordinary in Buddhism. "His body must be scientifically examined to know whether he has eaten or not," he said.

The crowds started flocking into the area after the committee began a special Puja by lighting 100 thousand candles during the last Dashain festival, while claiming that Bomjon had not drunk even a single drop of water after starting his meditation. Thing also claims that the news of Bomjon's "godly power" began to spread after two dumb people started speaking after visiting the meditation site.

Bomjon's mother says that her son has become a god. "He never touched any meat or fish, nor did he drink any alcohol. He was so different from others," she says, "He never fought with anyone and was peaceful by nature."

The meditation site has been cordoned off with ropes. The first cordon is 25 metres away from the actual place where Bomjon sits while the second cordon lies 50 metres away. It was only when people watching from beyond the second cordon started doubting that Bomjon was a human being did the committee allow for five people at a time to move to and observe from the first cordon. Each person is only allowed thirty seconds to observe Bomjon.
According to Prem Lama, Ratnapur VDC born Bomjon began studying Buddhism for five years after attending the local primary school till class five. He then spent some time in Lumbini and Dehradun (India), spending one more year studying Buddhism and returned home last January. He began his mediation after spending a further four months studying Buddhism at home.

(All photos by Bikash Karki)