NIJGADH, BARA (Nepal) -- Ram Bahadur Bomjon, popularly known as the Buddha Boy, who had disappeared from the jungle of Ratanpuri in Bara district, nine months ago, has reappeared nearby the area. 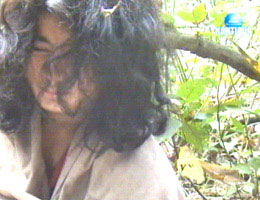 The 17-year old teenager Bomjon, who had been "meditating without any food or water" in the jungles of Ratanpuri village in the district had disappeared under unknown circumstances in March this year and was found in the jungles near Pathlaiya-Nijgadh road section of the Mahendra Highway on Sunday.

Local villagers who had been out hunting found Bomjon in dense forest located 5 km west of the highway yesterday night.

Bomjon appeared before the media and local villagers this afternoon in the same place.

His disappearance got widespread national and international coverage after news reports about his sudden abandonment of the meditation site at Charkose Jhadi of Ratanpur area in the district, where he had reportedly been meditating without food and water for ten months, were made public.

Bomjon had a sharp sword with him when the media reached the site.

When asked why a person in search of peace carried a sword, Bomjon replied that he had taken it for his "own protection."

The young man claimed he had still not eaten anything except herbal medicines during his meditation period.

Bomjan also said that henceforth he would meditate near the historical Halkhoriya pond, some five kilometers west of the place where he used to meditate before his disappearance.

Following the information that he had been spotted, a large number of people, including his family members and security personnel have arrived at the place to see him. The hunters who first spotted the Buddha boy are Rajendra Kunwar, Ram Krishna Moktan, Jaya Bahadur Kunwar and Bal Krishna Ale, of Dumarwana.

Son of an ordinary farmer in Ratanpur village of Bara district, Bomjon, his supporters and followers claim, had meditated without eating and drinking for months.

The Buddha boy has said that he does not want his new meditation site to be noisy and has said that his followers be allowed to see him only from a distance of some 10 meters. When asked what should be done with the donations that his followers and visitors would make, he urged to do anything with the donations, but keep from engaging in business or misuse.

The story of his meditation resembled an episode in the life of Gautam Buddha, who found enlightenment more than 2,500 years ago after 49 days. Coincidentally, Buddha was born only 257 km (160 miles) from Bara in 540BC.

Interestingly, Bomjon's mother's name, too, is Maya Devi- the name of Buddha's mother.