The sands of the Bishnumati could turn to gold again

Kathmandu, Nepal -- Chibakhel is not usually counted among Kathmandu’s attractions. Situated in Ward 19, it is off the tourist trail and few even in Kathmandu have heard of it. 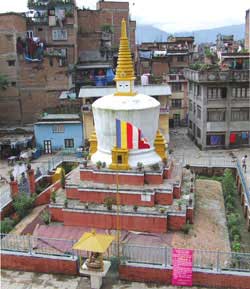 But like the valley’s other hidden corners, it is oozing with history. More importantly, a local citizen’s initiative has begun to transform a neighbourhood that was one of Kathmandu’s dirtiest and least appealing.

There are supposed to have been 12 Ashoka Stupas in the Valley, and it is surprising how frequently you stumble across one. Chibakhel (from Newari chibakhyo, ‘Place of the Stupa’) is one of these.

The stupas probably date from the Licchavi period, and Chibakhel is on a spot that gives it a good claim to antiquity situated on the banks of the Bishnumati where there has probably always been a bridge on the road to Swayambhu.

When the city walls were built, Chibakhel wound up outside them. Since people who did necessary ‘polluting’ work were not allowed inside the walls, the neighbourhood became the home of Newar butchers who still live there.

The stupa had a pipal tree growing out of it, and it was restored a few years ago, though not with the greatest sensitivity. Still, what was once the scene of daily butchery is now a pleasant square and a playground for children. The initiative to further revitilise the neighbourhood has been taken by Kamal Shahi, who was born in the square and was one of the first to take in hippies in the 1960s (see box).

The stupa plinth is now covered with potted plants, looked after by a gardener with copious advice from the local women. Rubbish collectors stop by to collect trash so it doesn’t pile up in the streets. The square has become part of the route for the Duwadashi procession just before Indra Jatra, and Shahi states proudly that, in spite of this being the butcher’s quarter, the offerings in front of the stupa are uniquely vegetarian.

But his big idea is to build a small Buddhist Vihar on an abandoned plot, not only for ceremonial purposes but as a community centre and library, where young people could learn traditional Newar arts like image casting and paubha painting activities from which ‘lower castes’ have traditionally been barred. Having fought caste prejudice to become a sculptor of Buddhist images, Shahi has personal experience.

Shahi also feels that sometimes Newar Buddhism leans too far towards ceremony and superstition, while forgetting the original message. Now, in preparation for the vihar, Shanta Ratna Shakya, chairman of the Nepal Rashtriya Gyanmala Samiti comes and teaches Pali chanting, while a Newar Theravada monk gives brief sermons on the original message of Buddhism.

The rebirth of Chibakhel has happened because of local initiative. There are no aid agencies or foreign charities involved. It is taking time, but it has a sustainable momentum. Once the Vihar and community centre get built, the locals plan to clean up the river bank. There is not much the inhabitants of the square can do about the sludge coming from upstream, but they can take care of their own part of the Bishnumati.

If such local initiatives take off everywhere along the river, who knows, maybe someday the sand will again turn to gold.

-----------------
Scott Berry is associated with CNAS and co-author, with Rashmila Shakya, of From Goddess to Mortal, the True life Story of a Former Royal Kumari.