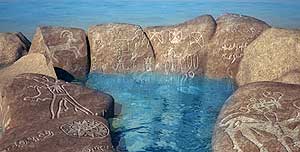 The northern area of Pakistan is a mountainous region which lies between the western Himalayas, the Korakoram in the east and the Hindukush in the west. Here, the junction of the ancient routes made the upper Indus a cradle and crossroads of different civilizations.

Travelers, invaders, merchants, pilgrims and artisans from different ages and cultures used the legendary silk route and its branches to enter in the region. Many of them left their cultural and religious signs on the rocks, boulders and cliffs.

The sun-tanned smooth rocks attracted more visitors and settlers to carve their own signs, symbols, inscriptions and artworks on the same locations. And hence, gradually a rock art archive accumulated in the area and eventually became a wonderland of some 50,000 rock carvings and 5,000 inscriptions from different civilizations ranging from the eighth millennium BC to the coming of Islam (since the 16th century AD) in the region.

The diversity of the rock carvings in the region turned the area into one of the most important rendezvous of petroglyphs in the world.

The history of discoveries

In 1884, a Hungarian traveler, Karl Eugen discovered a Buddhist carving in present Baltistan. In 1907, a veteran explorer, Ghulam Muhammad unveiled another Buddhist petroglyph from the Diamer district.

When the 750 km long, Karakorum Highway (the modern Silk Road) inaugurated in 1978, thousands of more engravings came to view which inspires a German scholar, Karl Jettmar to further explore the rock art wealth.

In 1980, Karl Jettmar and Pakistan’s father of archaeology, Ahmed Hassan Dani launched a Pak-German study group to systematically investigate the ancient rock art in the region.

Another research project entitled “Rock Carvings and Inscriptions along the Karakorum Highway” was initiated in 1983. The Heidelberg Academy of Humanities and Sciences and the Department of Archaeology of Gilgit were responsible for the study group. Professor Harald Hauptmann has been the head of the project since 1989 as a successor of Jettmar.

Hauptmann told Dawn.com that a total of 37,051 carvings on 5,928 boulders or rock faces will be inundated after the construction of the Diamer-Basha Dam.

The site represents hundreds of inscriptions in Brahmi, Sogdian, middle Persian, Chinese, Tibetan and even ancient Hebrew languages. Some 80 per cent of the writings are in Brahmi language.

These writings not only provide insights into the religious and political situation but also show the name of the rulers and a rough date of the time. These details of the inscriptions helped the experts arrange them chronologically.

One of the interesting Brahmi inscriptions can be read as; Martavyam Smartavyam, which means: “(Always) remember that (one day) you must die.”

The earliest rock carvings in northern Pakistan dates back to the ninth millennium BC (roughly late Stone Age). Wild animals and hunting scenes are commonly found in this era but the hunter himself was never found.

The following Bronze Age petroglyphs represent the most spectacular carvings of giants. These life size male giant figures with stretched arms could be assumed to be images of ghosts, demons, deities or gods. Some 50 such carvings have been discovered in northern areas but all the giants have no facial features.

In the third millennium BC, agriculture started in the region and carvings of horses were observed for first time. Then in the beginning of the first millennium BC, the area witnessed invasions by new ethnic groups such as the Sakan tribes. They carved sketches of Eurasian animals, most of them very interesting, bizarre and mythical in nature.

Later, another bunch of carvings appeared representing more mythical creatures, horses and warriors with Persian attire. These depicted the Iranian influence in the region and the expansion of Achaemenid Empire in sixth century BC.

The Golden era of Buddhism

In the first century AD, Buddhism emerged in the area as new belief system and reached its peak between the fifth and eighth century. Many spectacular carvings of Buddha and stupas – sacred buildings – and related inscriptions were found carved in the same era. 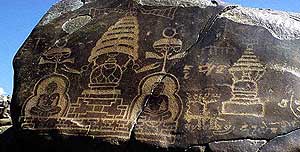 According the Hauptmann, the historic period of early Buddhism started from this area because of findings of old Indian style Khorashti language or Sanskrit. The venerations of Buddha and names of different kings show the climax of Buddhism in this area.

Although addressing Pakistan’s energy crisis is an urgent need and the Basha Dam would help bridge the gap between the demand and supply of power, the conservation and mitigation of these carvings is also very important.

When Dawn.com, asked Hauptmann about mitigation of the rock carvings in one hand and the need of the dam on the other, he said, “We (as an archaeologist) have to respect the decision (to build the dam) but it is very sad for us to lose one of the most rich and diverse rock art provinces of the world.”

According to Hauptmann, the Basha Dam will drown 32 villages and displace more than 25,000 people.

He added that some 3,000 very important stupas and similar number of drawings will be submerged after the construction of the dam. He called to establish a cultural center in Gilgit where original and replicas of the carvings could be preserved along with scientific documents about the geography, history, languages, music, wildlife and other aspects of the northern areas.

This center could be a rendezvous for scholars, writers, visitors and for future generation to discover the exciting history of the region.

This area is also famous for the amazing story of mysterious gold-digging ants.

Greek historian, Herodotus (in fifth century BC) wrote (Historia III, 102-105) about the land of Dardai, where gold-digging ants – “bigger than fox, though not so big as a dog were used to collect gold particles.”

Later, other historians and writers such as Arrian, Claudius Aelianus, Ktesias, and Plinius shed some light on this amazing tale that fox-sized fuzzy “ants” were found in far eastern India in a region with yellow sand rich in gold particles.

The creatures piled up the dust and dirt while digging up the burrows where people would collect them to extract gold.

In 1854, Alexander Cunningham mentioned the fact that “the sands of the Indus have long been celebrated for the production of gold.”

In 1984, a French ethnologist Michel Peissel wrote a book named, “The Ants’ Gold: The Discovery of the Greek El Dorado in the Himalayas”. Peissel suggested that Herodotus actually mentioned the Deosai Plateau of Pakistan in the story of gold-digging ants.

He said that not ants but (Himalayan) marmot used to dig deep burrows and pile large amount of sand. He further wrote that Deosai Plateau is rich in gold particles where marmot were found in abundance and thus solved the thousands-of-years-old gold-ant puzzle.

Peissel also claimed to interview Minaro, Maruts or Sonival tribes of Deosai Plateau and they confirmed the gold collection procedure through marmots.

But why did Herodotus write about gold-digging ‘ants’? Peissel presented the theory that Herodotus was probably unaware of the Persian language and depended on local interpreters and never claimed to see any ants by himself. He was confused because the old Persian word for “marmot” was very similar to that for “mountain ant”.

Dr. Ayesha Pamela Rogers is the director of Rogers Kolachi Khan and Associates (RKK) and contracted by the Water and Power Development Authority (Wapda) for the Heritage Impact Assessment survey and report for the dam.

RKK launched its first report in 2009 as a long term comprehensive management plan to safeguard the heritage and help the people affected by the building of the reservoir.

Rogers agreed that some 30,000 carvings on 5,000 rocks will be affected. Some of them will be totally submerged; others will be seasonally under water and then exposed when water level are low, she assessed.

“Other (rock carvings) will be seasonally under water and then exposed when water levels are low, others which are now at high elevations will be close to the new shoreline. It means mitigation and conservation approaches are needed for this entire situation.

Other threats exist which are not related to the dam – many carvings are being vandalised as we speak – and new risks will arise if and when tourism is developed. Again, all these need to be addressed in a management plan,” she added.

She further said that Wapda is committed to this project and preserving whatever it can.

The pages of history, language and religion have been carved on the upper Indus rocks and they have been talking to humanity for hundred of years. An urgent and comprehensive plan is needed to preserve them for the world and for the generations to come.