Rescuing the Ancient Buddhist Artifacts of the Yungang Grottoes

Yungang, China -- The Yungang Grottoes are ancient Chinese Buddhist temple grottoes near the city of Datong in the province of Shanxi. They are excellent examples of rock-cut architecture and one of the three most famous ancient Buddhist sculptural sites of China. 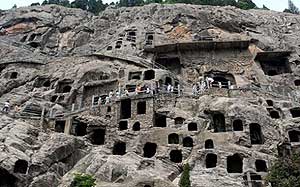 With their 252 caves and 51,000 statues, the Yungang Grottoes represent the outstanding achievement of Buddhist cave art in China in the 5th and 6th centuries and the power and endurance of Buddhist belief in China. The colossal Buddhist statues that sit within the Cliffside caves have survived the rise and fall of dynasties, wars, and revolutions, but it is the harmful effects of modern-day living, including industrial pollution, which is the greatest threat to these ancient wonders, according to reports.

Datong, known as Pingcheng in ancient times, became the capital of the Northern Wei dynasty between 398 and 494, and thus the political, economic and cultural centre of their kingdom. It kept its importance until 523, when it was deserted following a revolt. The statues of the Yungang Grottoes were completed in sixty years (460-525); this period marks the peak of development in Buddhist cave art of the Northern Wei dynasty. When the first emperor assumed the throne, Buddhism flourished and in 460 the monk Tan Yao started the carving of the Five Caves; since then, these grottoes have become the centre of Buddhist art in North China.

Since the 1960s, the Yungang Grottoes have been protected in law by both the Chinese Government and the Datong Municipal government, and in 2001 the whole area was listed by UNESCO on the World Cultural Heritage List, both to recognize its immense historical significance and to protect them from destruction.

Vast parts of China have some of the world’s worst outdoor air pollution, and ancient sites across the country are falling prey to its effects. A large part of the problem is coal. Burning coal emits sulphur dioxide, which further oxidizes in the atmosphere and then combines with water to produce sulphuric acid, which eats away at the sandstone. In the 1980s and 1990s, as the coal industry in Shanxi Province powered growth throughout China, up to 20,000 coal trucks passed each day.

However, Chinese officials and preservationists have now embarked on an ambitious effort to protect them that could become a model for saving antiquities at other sites. They have not only cleaned the statues here and created a vast park, but also shut down nearby coal mines and removed or regulated other sources of air pollution.

Workers used soft brushes to remove the coal dust that coated the statues. Many of the Buddhas now appear in the golden glory envisioned by their creators. On some statues, vivid paint added during later dynasties is visible again. The biggest Buddha, a seated statue 56 feet tall, has a thin layer of gold paint on its face.

“You don’t know how bad it was before,” said Huang Jizhong, the head engineer at the Shanxi Province Cultural Relics Bureau and former research director at the grottoes. “The contrast is very dramatic.”

While great steps forward have been made in the preservation of these ancient relics, what Chinese officials have been unable or unwilling to control are the stratospheric levels of air pollution and the resulting acid rain, which continues to pose a threat.