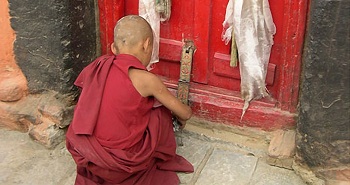 Archaeological digs have been taking place for over 70 years at the Phanigiri hillock near Nalgonda, in India’s southern province of Telangana. The recent discovery however, represents one of the most significant yet made at the site.

The findings have led to the location being described as the most important site in the region. During excavations of the Mahastupa – a large, mound-like structure containing Buddhist relics, the archaeological team unearthed a red earthenware pot which held a silver container.

Within the silver box was a well-preserved collection of eleven miniature beads, some made of silver. The beads were probably prayer beads and may have belonged to a Buddhist monk who was an important figure in the area.

Alongside the earthenware pot, a Potin Coin made of a copper and lead alloy was discovered. On one side of the coin was a bust of a king and on the reverse a depiction of a ship. Researchers were able to precisely date the coin to the third century CE, as one side was adorned with a particular set of characters prevalent at the time.

The Phanigiri Mahastupa presents a unique glimpse into Buddhist history in the area. “The Buddhist findings are pertaining to third century CE. [This marks the] first time we have a Buddhist cascade with material in it and this puts [the] area as an important Buddhist heritage site,” BP Acharya, principal secretary of tourism for Telangana, told the New Indian Express. For Acharya, the recent discoveries represent the culmination of excavations which began at the site in 1941.

It is reasonably rare to discover personal objects in stupas; they typically contain the physical remains of Buddha and his disciples. The archaeologists’ discovery of carefully stored beads allows us to see what Buddhist monks in the third century used in their day-to-day lives.

“Usually we get only bodily remains of Buddha or of any important monks. The fact that gold, silver and beads were preserved here indicates the importance of the personality”, explained J Vijayakumar, Deputy Director of Excavations at the site.

The 16-acre site on the hill of Phanigiri dates to between the third century BCE and the third century CE. It was a major Buddhist learning centre, with numerous Viharas (monasteries) and Chaityas (prayer halls). To date, only about four acres of the site have been excavated.

Within those four acres, however, a wealth of discoveries has already been made. Ruins of congregation halls, Viharas and one particularly impressive structure containing sixteen pillars have been revealed. Future plans for the site involve preserving and conserving it in order to create a heritage tourism attraction.

It is rare to find such well-preserved items from such a long time ago and it is also uncommon to find the physical possessions of Buddhist monks in stupas. The discovery of personal objects in the Phanigiri Mahastupa provides hitherto unknown information about the everyday life of third-century Buddhist monks.