Gilgit, Pakistan -- Although international collaborations in research and collection of information have helped us understand the antiquity and cultural heritage of Gilgit-Baltistan, there is much that still remains to be done — predominantly in the area of heritage research 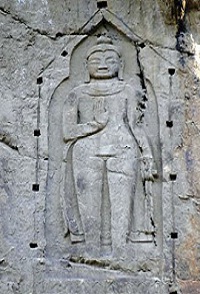 << The famous Kargah Buddha in Gilgit.

“The discovery of Buddhist texts in Gilgit… indicates the presence of learned communities in Gilgit and Hunza. Nor do I exclude the possibility that some stupas may still be discovered in Baltistan containing other books,” stated the legendary Italian scholar of oriental cultures and religions, Professor Giuseppe Tucci, about the cultural and religious heritage of Pakistan’s Gilgit-Baltistan region.

Owing to its location on the intersection of the Silk Road, Gilgit-Baltistan has received cultural influences from across the region. It is the region’s cultural heritage and its centuries old cross-cultural contacts with China, Central Asia, Kashmir, Tibet, Afghanistan, Iran and India that have made the region so attractive for research.

Explorations dating back to the later part of the 19th century have resulted in the discovery of ancient routes once active as arteries of the Silk Road; pre-historic sites; ancient Buddhist texts; rock carvings in more than 10 languages; graves and wooden structures all manifesting the antiquity and cultural diversity of Gilgit-Baltistan.

The well-known German scholar on early history of Gilgit-Baltistan, Professor Karl Jettmar confirms that by about 500 BC, the banks of “the Indus east and west of the present township of Chilas became a junction, a cross road in a system of Trans-Asiatic routes for migration and trade. The system remained important for more than one and half millennium”.

John Biddulph, Sir Aurel Stein, Ghulam Muhammad and Giuseppe Tucci were the predecessors of Jettmar whose publications drew the world’s attention to the cultural significance of Gligit-Baltistan. For instance, John Biddulph’s famous book Tribes of Hindoo Koosh published in 1880, announced the existence of primitive structures in and around Gilgit.

The well-known archaeologist Sir Aurel Stein’s famous Central Asian expeditions brought a clear focus on the need for future research on the region’s ancient roots. He travelled through parts of the present day Gilgit-Baltistan and Chitral while on his expeditions to China and Central Asia. The reports of his First Expedition (1900-01), Third Expedition (1913-16), and Fourth Expedition (1930-31) record useful information about the monuments found in the area. His list includes the famous Kargah Buddha in Gilgit, a 20-feet high stupa near Thol in today’s Nagar, the ruined mounds in Hanzel near Gilgit, the Taj Moghul mound in Jutial and a chain of stupas in Naupur.

Sir Aurel Stein also discovered inscriptions, engravings and ancient jewellery while travelling through villages of the Yasin valley. Credit goes to him for announcing the discovery of the famous Buddhist manuscripts from Naupur in Gilgit in 1931.

Ghulam Muhammad’s account of the festivals and folklore of Gilgit is a pioneering work that provides insights into the region’s culture. The study was published in the Memoirs of the Asiatic Society of Bengal in November 1905. Focusing on the folklore and old customs of Gilgit, he records the existence of pre-Islamic engravings and cultic stones in Gilgit, Chilas and Astore.

Like Biddulph and Aurel Stein, his account also contains a description of the Kargah Buddha. He describes how the people venerated and used the Blue Stone of Gilgit, the Shri Bai rock in Astore, and the five cultic boulders in Bagrote in local festivals and rituals. His foremost contribution is the identification of stones along the bank of the Indus river bearing figures and inscriptions.

Later, these stones captured Professors Ahmad Hasan Dani and Karl Jettmar’s attention. They conducted extensive research to explore and document these and other rock inscriptions in the upper Indus valley, which according to Professor Dani, “hold the key to the understanding of great cultural traditions of the world”.

When Aurel Stein was engaged in his explorations and compiling the enormous information collected from China, Professor Tucci had turned to his studies in Mahayana Buddhism. From Italy, he went to India in 1925 where he started teaching and researching at the Shantiniketan and Calcutta University. During his stay there, Professor Tucci developed a special interest in Tibetan studies, which continued till the very last years of his life. By 1931, he had already made three study trips to Ladakh, Rupshu, Lahul and Baltistan. During his Baltistan visit, he discovered and admired “huge boulders on which were engraved most beautiful bas-reliefs representing rows of Buddhas and portraits of donors”.

Professor Tucci also found other sculptures that were scattered on the rocks. Based on his research in Tibet and study of Buddhism, he concluded that Skardu was once a very important Buddhist centre and “even enjoyed a great prestige among Buddhist communities of Khotan”.

By 1931, Gilgit came to prominence as a famous archaeological site. It was due to the discovery of the world’s oldest Buddhist manuscripts from Naupur that brought Gilgit to the centre stage of research on Buddhism. The precious finding followed a systematic excavation of the Naupur site and discovery of another set of the Gilgit Manuscripts by M.K. Shastri in 1938. The manuscripts have received enormous attention globally and a growing number of scholars are working to this day to translate and interpret the historical context of these extraordinary religious texts.

The next important phase of research on Gilgit-Baltistan is the German Hindu Kush Expedition of 1955-56. Professor Adolf Friedrich (1914-1956), the then Director of Mainz Institute of Ethnology in Germany, led the expedition also known as DHE. By far, the greatest achievement of DHE was that it paved the way for further research. Despite the illness and tragic passing away of Professor Friedrich in the midst of the research mission, his highly motivated team comprising Karl Jettmar, Georg Buddruss, and Peter Snoy continued the DHE activities in Gilgit-Baltistan, Chitral and parts of Afghanistan.

DHE was the only team to visit Darel and Tangir valleys and collect data on culture, history and remnants of pre-Islamic ideas. The research data collected by DHE still remains a major source of research on these valleys.

The opening of the Karakorum Highway in 1978 brought an excellent opportunity for scholars to carry forward research on Gilgit-Baltistan. Professor Jettmar, himself an active member of DHE, together with Professor Dani, a distinguished scholar on archaeology of Pakistan, founded the ‘Pak-German Study Group for Anthropological Research in Northern Pakistan’. Following its first expedition in 1979, and the documentation of scared rocks of Hunza, the Study Group documented and published a wealth of information on the language, culture, and history of Gilgit-Baltistan and the ancient Silk Road. This also includes the discovery of thousands of inscriptions in Kharoshti, Brahmi, Sogdian, Tibetan, and Chinese, and petroglyphs representing figural engravings along the upper Indus.

The Study Group has also documented Buddhist shrines, graves and wooden mosques in the region.

In 1982, Professor Jettmar initiated ‘Rock-Carvings and Inscriptions along the Karakoram Highway’, a project supported by the Heidelberg Academy. He and later Professor Harald Hauptmann have systematically documented and published information on thousands of rock-carvings found in what is called the world’s largest ‘rock art museum’ located where plans are final to build the Diamer-Bhasha Dam. A groundbreaking publication under the project is the three volumes of Antiquities of Northern Pakistan published in 1990-94.

Culture Area Karakorum (CAK) is another research project that has made valuable contribution to multidisciplinary research on Gilgit-Baltistan. The German Research Foundation funded the project from 1989-1998, which was jointly led by Professor Irmtraud Stellrecht from Germany and Professor Dani from Pakistan. Under CAK, scholars and researchers from Germany and Pakistan conducted extensive research on topics ranging from glaciology and environment to prehistory and linguistics. The project has published 12 volumes of CAK Scientific Studies in English and German to disseminate the results of the research project. Bibliography – Northern Pakistan, is an important CAK publication that contains over 4,000 entries.

The international collaboration has resulted in far-reaching research and collection of wealth of information contributing to a better understanding of the antiquity and cultural heritage of Gilgit-Baltistan. However, there is much that still remains to be done predominantly in the area of heritage research. Scholars in several countries are taking great interest in the archaeological findings of Gilgit-Baltistan. Many of them are engaged in analysing and interpreting the data already collected from the area.

There is a greater need for the Pakistani scholars to undertake more comprehensive explorations to intensify heritage research in Gilgit-Baltistan. It has become even more urgent given the pace of development in the region that has gradually brought Gilgit-Baltistan’s cultural heritage to the verge of extinction. The Karakoram International University (KIU) under the new leadership is well positioned to lead this effort. The university needs a world-class research institute to study and document the rich cultural heritage of Gilgit-Baltistan before it is lost forever!