Abbottabad, Pakistan -- Villagers of Sherwan Khurd, situated some 48 kilometres north-east of Abbottabad city, have discovered an ancient settlement dating back to the Buddhist era. 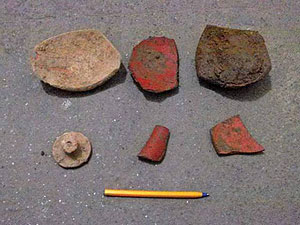 However, locals may have caused damage to the historic site through a series of construction.

While speaking to The Express Tribune on Sunday, Qayyum Khan, a villager, said locals planned to construct the damaged minaret of a mosque on the site.

He added, “When the labourers started digging the site, they found artefacts buried 14 feet below the ground.”

They informed Abbottabad DC Ammara Khattak about the discovery. “The DC approached the archaeological department officials in Hazara University and asked them to visit the site,”
Qayyum said.

According to Shakirullah, the remains found from the site suggest the area was once inhabited by a settlement of the Hindu Shahi era.

“I believe the settlement was spread over an area of roughly 30 kanals,” he added.

“Although locals have built houses on 80% to 90% of the site, around 10% to 15% of the area could be used for proper archaeological investigation.”

Shakirullah added, “Sherwan was historically called James Abbott’s peak and some more Buddhist sites could be discovered in the area.”

“I have asked the provincial archaeological department and Abbottabad DC to take immediate steps for proper investigation, protection and preservation of this site,” he said. “It is susceptible to harm like other important sites that have yet to be declared protected.”