Swat, Pakistan -- Sculptures and carvings dating back more than 1,700 years have been discovered in the remains of a shrine and its courtyard in the ancient city of Bazira. The sculptures illustrate the religious life of the city, telling tales from Buddhism and other ancient religions. 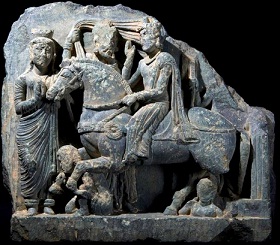 Also called Vajirasthana, Bazira is located the in the Swat Valley in Pakistan. It was first constructed as a small town, during the second century B.C., and eventually developed into a city located within the Kushan Empire. At its peak, this empire ruled territory extending from modern-day India to central Asia.

Today, the ruins of Bazira are located near the modern-day village of Barikot. The Italian Archaeological Mission has been excavating Bazira since 1978, gradually unearthing remains of the ancient city. [See Photos of the Ancient City Ruins and Sculptures]
The great departure

One of the sculptures, carved in green schist, depicts a prince named Siddhartha leaving a palace on a horse named Kanthaka. The sculpture likely form part of the shrine's decoration, the archaeologists said.

According to ancient Buddhist stories, Siddhartha was a wealthy prince who lived in a palace in Kapilavastu, which is in modern-day Nepal. He lived a cloistered life, but one day he ventured outside his palace and encountered the suffering faced by common people. After this experience, he decided to leave his palace to live as a poor man in order to seek enlightenment. He later became the Gautama Buddha. [In Photos: An Ancient Buddhist Monastery]

In the carved scene, two spirits known as yakshas support Kanthaka's hooves, wrote archaeologist Luca Olivieri, who directs excavations at Bazira, in the Journal of Inner Asian Art and Archaeology. Meanwhile, the town goddess of Kapilavastu, who is shown wearing a crown, holds her hands together in a sign of veneration.

An unknown man — maybe a deity, Olivieri said — stands behind Kanthaka, with his left hand to his mouth and his right hand waving a scarf-like garment called an uttariya.

A carving found in Bazira shows an unknown deity with a wine goblet in one hand and a goat's head in the other.

In the courtyard, archaeologists found another carving, this one dating to a time after an earthquake had damaged the shrine. The shrine had been rebuilt using perishable materials, likely wooden posts, the archaeologists said. Also at around this time, the courtyard was converted into a kitchen area that serviced nearby homes.

The carving "pictures an unknown deity, an aged male figure sitting on a throne, with long, curled hair, holding a wine goblet and a severed goat head in his hands," Olivieri told Live Science, adding that the figure looks a bit like images of Dionysus, the Greek god of wine.

Wine was widely produced in the Swat Valley, and some people in the area, even monastic Buddhists, had issues with drinking alcohol, Olivieri said. "We found dozens of ancient winepresses and vats in the countryside," Olivieri said.

From "texts, it seems that Buddhist schools tried their best to curb the habit of consuming wine and other 'intoxicating drinks' even amongst the monastic community," he added.

The goat's head in the carving also symbolizes a local passion, Olivieri said. "The goat is an animal associated to the mountains in the cultures of Hindu Kush, the local region," Olivieri said, adding that it was used as an icon in ancient rock art.
Stupa with lions

Another beautiful carving that once decorated the shrine depicts a stupa, a structure shaped like a mound that is used for meditation. Near the top of the stupa is a platform known as a harmika, which is decorated with a rosette design. Above the harmika, there are three parasol-like structures called chattrasthat face up toward the sky.

Two columns, with lions on top, are carved next to the stupa. The lions peer down at the stupa (which is at the same height as the columns), as if they are watching over it.

This scene could be based off of a real, ancient stupa that existed in the Swat Valley, Olivieri said. "Real stupas with four columns — topped by crouching lions' statues—at the corners of the lower podium have been documented in Swat," Olivieri told Live Science.

One stupa like this was excavated in the 1960s and 1970s. Archaeologists found that it was used between the first and fourth centuries A.D., the same time that Bazira flourished.