Kabul, Afghanistan -- There was universal outrage - even in the Muslim world - when the Taliban made good their threat to destroy the Bamiyan Buddhas in an act of religious piety on March 1 five years ago. 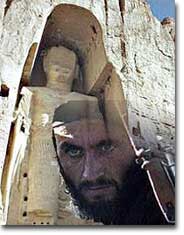 Two weeks later, the fundamentalist rulers in Kabul proudly announced they had carried out their pledge. The huge statues, a World Heritage Site, had been machine-gunned and then blown up.

Just six months later, following the terrorist attacks on the World Trade Centre and the Pentagon, the US moved to topple the Taliban. But the damage wrought on the famous statues is permanent and, according to the UN cultural organisation UNESCO, there are currently no plans to rebuild them.

Buddhist monks carved the two statues standing 38 and 55 metres high out of the cliff face in the sixth century.

Since the Taliban were driven from power at the end of 2001, UNESCO has been in charge of maintaining what remained of the statues after the religious fanatics had done their work.

The niches cut out of the rock in which the huge Buddhas stood have been propped up to prevent collapse, remains of the statues have been collected and stored, and what was left of the wall paintings has been preserved.
There is little more that can be done, according to Afghanistan expert Christian Manhart of UNESCO's World Heritage Centre. "Reconstruction is not possible at this stage," he says.

There have been repeated proposals, mainly from Switzerland, to rebuild the statues. Permission from the Afghan government and the technical capability are lacking, but the main reason for the absence of progress is fund shortage, says Manhart. He estimates rebuilding to cost $30 million.

There is a cheaper alternative. Instead of carving the statues from stone as was done originally, they could be cast in concrete, but UNESCO has rejected this.

"Then we would be left with a kind of Bamiyan Disneyland, and not the original that was created by the efforts of the Buddhist monks," Manhart says.

The leader of the Taliban, Mullah Omar, who to this day remains at large, personally ordered the destruction of the Buddhas. "It is in line with Islamic teaching that all statues should be destroyed," Omar said at the time.

But many Muslim scholars disagreed and said the Taliban had gone way beyond what is laid down in Islamic teaching.

The Taliban's march to power began in 1994, and within two years the "students of Islam" had taken Kabul. Time and again their rule provoked international outrage.

Adulteresses were stoned to death and girls banned from attending school. All secular music and television were banned. Even whistling was taboo. Special squads beat up women not wearing the veil and men without beards, and children were stopped from flying kites.

The country sank into poverty and squalor under the Taliban's incompetent rule. In the light of this, Omar's comment after the statues had been destroyed that it was a disgrace that the world was more concerned with stone objects than with the suffering of the Afghan people seems cynical.

But there were other voices that questioned the world's reaction. Britain's Independent newspaper noted that the world had woken up to conditions in Afghanistan only after the statues had been destroyed.

"As terrible as it is, this is by no means the worst that has happened during the 10 years the Taliban has been in power," it said.

But it was neither the violation of human rights nor the destruction of the statues that brought the Taliban down, rather their refusal to comply with demands for the extradition of Al Qaeda head Osama bin Laden following the 9/11 attacks. Until then, the world had appeared paralysed by the horrors of Afghanistan.

The Taliban has not gone away. They have been heard from again in the current controversy over the Danish cartoons of the Prophet Mohammed.

With the destruction of the Bamiyan Buddhas, the Taliban made clear their contempt for other religions. Now they are calling for Holy War over the cartoons.