Kabul, Afghanistan -- The image of a mythical creature has been found on a seventh century Buddhist mural in a cave at the Bamiyan ruins in central Afghanistan, a team of Japanese researchers said Tuesday, having successfully removed soot from the work. 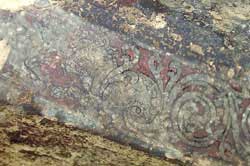 << News photo
A seventh century Buddhist image in Afghanistan's Bamiyan ruins depicts what some experts believe is Simorgh, a mythical bird with the body and wings of an eagle, the legs of a lion and the tail of a peacock. KYODO PHOTO

It is the first time a clear picture has been identified at Bamiyan, the site of an early Buddhist monastery featuring some 1,000 stone caves on cliffs facing Bamiyan city some 240 km west of Kabul.

It is an important discovery indicating how East and West met and mixed at a crossroads on the ancient Silk Road, experts said.

The Japanese team is from the National Research Institute for Cultural Properties.