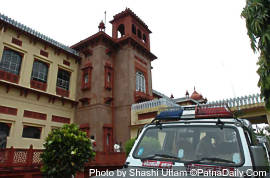 << 18 priceless statues were stolen from the Patna Museum

Robbers sneaked into the Patna Museum through a first-floor window and grabbed the 8th and 9th century statues from the gallery, said Anil Sinha, Patna's inspector-general of police.

Patna is the capital of eastern Bihar state — considered to be India's most lawless. The museum is near the city's main police station.

The antiques belonged to one of the richest cultural periods of Indian history, when the Pala dynasty ruled Bihar and West Bengal states.

Forensic experts were examining fingerprints lifted from the bronze gallery, but no arrests have been made so far, Sinha said. Interpol was alerted since the robbers were expected to try to sell the statues to buyers from outside India to get a higher price.