Archaeologists work to salvage fragments of the giant Buddhas

BAMIYAN, Afghanistan -- The supervisor halted work. Another suspicious piece of metal had been uncovered. As 50 workers stood amid the remains of two giant Buddhas carved into the cliffs of this serene valley, a munitions expert examined the rubble for unexploded bombs. 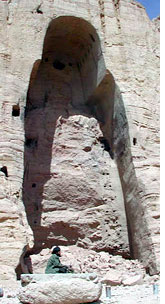 This time they were safe. This mess is what the Taliban left behind when they blew up the monuments in March 2001.

From the volume of twisted shrapnel mixed with the dust and rocks, it's clear the Taliban expended an arsenal to bring down the statues - one was 174 feet tall and the other was 115 feet.

It took Buddhist monks several decades to build the monuments 1,500 years ago. The Taliban, who declared the statues idolatrous and un-Islamic, required only a few weeks to blow them up. Five years later, experts are still making an inventory of the fragments, slowed by stoppages every half hour or so to look for buried bombs, grenades and mines.

"We're concentrating now on preservation of what is left, collecting the physical remains," said Georgios Toubekis, a German architect from Aachen University who is supervising the work for the International Council on Monuments and Sites.

Toubekis hopes the recovery is not an empty exercise.

"It makes no sense to just collect the pieces and not do anything afterwards with them," he said. "You have to think about what to do with them."

That big question remains unresolved: What to do with thousands of tons of Buddha bits, some the size of small automobiles, but most of it dust. Some people want to reassemble the fragments, rebuilding the Buddhas entirely or in part. Others suggest the Buddhas could be reconstructed in new material - concrete, bricks, plastic or even symbolically, with laser light.

Still others argue that the Taliban's iconoclastic act is now part of Bamiyan's history and must be acknowledged.

"The destruction of the Buddhas by the Taliban in the 21st century, it is history also," said Nasir Mudabir, the site director for the Afghan Ministry of Information, Culture and Youth. "If you reconstruct them, you destroy the history."

Bamiyan's political leaders, as well as Japanese archaeologists who share an affinity with Buddhism, want to rebuild the monuments as the centerpiece of the Bamiyan Valley, here in the Hindu Kush mountains. Here Buddhist culture reached its peak in the sixth century when a royal metropolis developed along the Silk Road, the route linking Asia, the Middle East and Europe. UNESCO declared Bamiyan a World Heritage Site in 2003.

"It is the desire of the people, and my wish also, to have at least one of them rebuilt," said Habiba Sarabi, Bamiyan's governor, who hopes the site will draw tourists.

But attempts to replicate the statues make purists queasy.

"Basically we're getting pressure from everywhere that we have to rebuild them," said Omar Sultan, deputy culture minister. "But as an archaeologist, I can't imagine we could go reconstruct a Buddha from concrete or something. Those artists who did it 1,500 years ago had another feeling for it."

Sultan, however, does not object to some type of anastylosis, a reconstruction technique in which original fragments are pieced together in new material in such a way that the missing parts are obvious.

The challenge for anyone repairing the Buddhas is that not much of the debris can be easily identified. The statues were carved from a cliff of conglomerate - an amalgamation of rounded rocks and sand. When the soft rock fell, much of it was pulverized.

Because conglomerate would not hold small details, the original artists covered it with a thick layer of plaster, which allowed them to add the fine shapes and paint the surface. The plaster was attached to a matrix of hemp rope and wooden pegs hammered into the rock. The plaster was bonded together with ox hair.

Much of the plaster surface had already eroded long before the Taliban trained its guns at the Buddhas. What's left did not withstand the bombardment well. Most of the surviving pieces of painted plaster are the size of matchbooks.

"You have to find the location of the fragments, and there aren't so many pictures of the Buddhas that give you the precise location of pieces," Toubekis said.

He said comparing the fragments with the surrounding strata in the cliff may provide geologists with clues about the rocks' location.

"They can even scan the material and sort out different patterns, to get something like a fingerprint," Toubekis said.

For now, the larger pieces are numbered and stored in barns built of rough lumber and sheet-metal. The smaller plaster bits from the Buddhas' surface are stored in an office. Most of the grit is heaped in piles outdoors.

Reconstruction of a single Buddha could cost $30 million or more, but no one is estimating the amount of time.

The Buddhas are only part of a larger collection of ruins recalling a pre-Islamic civilization that thrived in this valley 8,000 feet above sea level.

Japanese archaeologists have sealed off some grottos carved into the Bamiyan cliff face that contain some of the few frescoes undamaged by the Taliban (the Islamic puritans scratched out the faces on many cave paintings because they thought depicting the human form was blasphemous).

By some estimates, 80 percent of the cave paintings that existed in 1970 have been destroyed or stolen.

Italian engineers also shored up the precarious cliff face, which was in danger of collapse after the Taliban bombardment.

Several archaeological teams are searching for Buddhist monasteries that thrived in the fourth through seventh centuries, when Bamiyan was the region's commercial and religious capital.

"The beauty of this area is one of the reasons why people came here to meditate," said Zemaryalai Tarzi, an Afghan archaeologist who teaches at the Marc Bloch University in Strasbourg, France, and whose work is supported by the National Geographic Society. "The cliff of Bamiyan was really a big screen for the artists to show their work."

Tarzi, 67, believes another giant Buddha may be buried in Bamiyan. A Chinese visitor in 632 described a reclining figure 300 yards long. While most archaeologists believe the clay reclining Buddha was probably destroyed long ago, Tarzi holds out hope that he will find it.

Meanwhile, Tarzi's recent excavations have uncovered one of the 10 monasteries that he says existed in Bamiyan during its heyday. The monastery did not yield clues about the reclining Buddha, but he said it did offer some modern parallels.

Long before Genghis Khan wiped out Bamiyan's population in 1222 - Afghanistan's political center arose instead in Kabul - Buddhists and Muslims coexisted until the Buddhists vanished around the year 1000.

In the excavated monastery, Tarzi pointed out dark traces where he said the structure had been burned and filled in. The Buddhist icons were destroyed, and gold and jewel adornments were looted.

Such destruction is not unusual in history, where new civilizations often wipe out traces of their predecessors.

In that sense, what the Taliban tried to accomplish here five years ago was a continuation of a mission that conquerors began a thousand years ago.