Takht-i-Bahi, Pakistan -- Takht-i-Bahi, a representative Gandharan Buddhist ruin of northwestern Pakistan and a registered UNESCO World Heritage Site, is in danger of collapse if an earthquake hits the region, The Yomiuri Shimbun has learned. 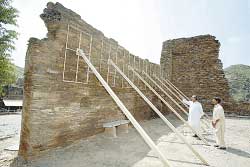 << A stone wall at Takht-i-Bahi in Pakistan's North West Frontier Province is supported by steel pillars.

Although the Pakistani government has purchased the quarry company to help prevent further harm to the ruins, repair and preservation work have not progressed because the work requires advanced technology.

Takht-i-Bahi is located in a hilly area about 50 kilometers northeast of Peshawar, the capital of North West Frontier Province. The 3.9-hectare stone Buddhist monastic complex was constructed from the second to fifth centuries.

Among the remaining structures at the ruins is the foundation of the main tower, which measures six meters by six meters, an offering tower and a monastery housing a meditation room. Residential buildings for priests in the typical mountain temple style dot the surrounding mountain ridge.

The ruins were unearthed in the early 20th century. In 1980, they were included in the list of UNESCO World Heritage sites as the largest Buddhist remains in Gandhara, along with the Sahr-i-Bahlol urban remains that date back to the same period, located about a kilometer south. A unique Buddhist culture, including the creation of Buddhist statues, flourished in Gandhara.

According to the Pakistani Archaeology and Museums Department, the ruins began to lean noticeably in the late 1990s.

The five-meter-high, 15-meter-wide south wall of the lecture hall in the northwestern section of the temple grounds is about 10 degrees off vertical and is supported by seven steel pillars. Cracks and structural faults also have been found in the walls of the meditation room and pillars of the offering tower.

As construction materials are in great demand in the area, quarrying operations for materials, which had been contained to a mountain slope near the ruins, also began at a location just northwest of the ruins in 2002.

Blasting at the sites caused further cracks to appear at the ruins and caused the walls to lean.

Some walls at the ruins have been affected by rainwater, which began accumulating after passages in the ruins were paved as part of a maintenance project.

In 2003, the Pakistani government bought the quarry for about 9 million Pakistan rupees, or 18 million yen. In March, it designated a 220-hectare lot surrounding the ruins as a buffer zone to separate it from urban areas.

The department, however, has only five engineers to look after 74 ruins in the province, which is not enough to keep them all in proper repair.

Disassembling stone walls and reassembling them may be a good preservation strategy, but the department said it did not have enough expertise.

By the time Sahr-i-Bahlol was listed as a UNESCO site, there were about 1,200 houses on the site, with only an ancient stone frame remaining. However, the government simply advised local people not to build new houses there and took no further practical preservation measures.

Ahmad Nawaz, 44, who is in charge of preserving ruins at the department, said: "[The ruins] are in danger of collapse if we don't take steps. They're a cultural asset representing Gandhara. I hope experts across the world will help us repair and preserve them."