Nanga Parbat, Pakistan -- Some 35,000 petroglyphs located in Pakistan's Indus River area will soon be flooded by a giant dam. An archeologist from Heidelberg is trying to save as much as he can before encroaching modernity destroys the remote area's cultural history. 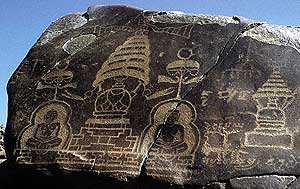 << This large rock features a Buddha next to a feretory.

At first sight, it's difficult to tell whether the work going on near Nanga Parbat mountain (8,126 meters, 26,660 feet) has more to do with preserving the world or heralding its demise.

Down by the Indus River, near a farmers' settlement called Basha, workers have built landing sites for helicopters. They have set up a cargo cablecar above the stream and technicians on the northern banks are drilling holes into the rock in order to search out hollow spaces in the depths. This being an earthquake zone, seismic analyses are also being conducted.

Here, in an oppressively narrow and steep canyon, construction of a gigantic dam is planned -- as high as a skyscraper and kept in place by its sheer weight. The future power plant's turbines are to yield 4,400 megawatts of electricity -- the capacity of four nuclear power plants. Behind the retaining wall, a reservoir will flood 32 villages and force as many as 40,000 people to undergo evacuation in the name of progress.

But the reservoir will also bury beneath itself the witnesses of entire civilizations and ancient cultures along the Indus -- mainly stony messages and images from Buddhist times, whose loss is fully comparable to that of the famous Buddhas of Bamyan, which were demolished with explosives by the Taliban in March 2001.

Home of the "gold-digging ants"

The Indus, the "father of all streams," originates near Mt. Kailash, the sacred mountain of the Tibetans. From there to its estuary by the Arabian Sea, the river stretches for 3,180 kilometers (1,976 miles), making it the longest river in South Asia. It approaches Basha from the Diamer district in the northern part of Pakistan, the so-called Northern Areas. Mountain climbers are familiar with the name "Diamer" because the daunting west face of the colossal Nanga Parbat mountain is also known as the Diamer face. 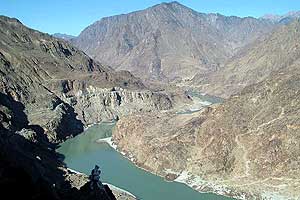 The Indus River travels through a steep canyon near Basha. The plan is to build the dam near the river bend.  >>

By the foot of the mountain formation, the Indus River struggles through clay-colored canyons that will soon be as hot as ovens again. Chilas, the capital of the Diamer district, is located on a boulder terrace on the southern bank of the river. Thanks to a mountain stream, the inhabitants of Chilas are able to wrest a great deal from the tough terrain: wheat, corn, cucumbers, tomatos, legumes, peppers and even chili peppers.

The people of Chilas belong to the Dards, an ages old people who the ancient Greek historian Herodotus once disparagingly described as being a breed of "gold-digging ants." There may be gold here, but the Dards who cross the river on dinghies and simple rafts to pan for it on the river bank are in truth a proud and courageous people.

For German archaeologist Harald Hauptmann, Chilas, the canyons of the Indus River and its side valleys are like a second home. He's fond of telling historical anecdotes such as Herodotus's ant story. Hauptmann, who works for the Heidelberg Academy of Sciences and Humanities, is conducting research into the area's many petroglyphs and rock inscriptions. The early precursors of modern mass communication date back as far as the end of the Ice Age 11,000 years ago.

War scenes have been scratched into the rock by artists here, as have mythical creatures, shamans and saddled but riderless horses. Strangers from every cardinal direction came here via vertiginous mountain passes -- from the steppes of Central Asia, from China and the former kingdom of Ladakh. They recovered from the grueling trip by the Indus, prepared for the dangerous river crossing and left signs and symbols from their respective homes and epochs.

Using hammers and chisels, they crafted images of Buddhist feretories in front of which pilgrims light bowls of incense. Captions comment on the motifs and give the names of the clients for whom the work was executed. Ritual formulas appear on the rocks, as do messages in old Chinese script, avowals by kings and high emissaries -- and 700 messages from Samarkand tradesmen alone, left on foundlings and slabs of natural granite and gneiss blocks.

In the clear light of the high mountains, Hauptmann has so far observed 35,000 of the petroglyphs and 3,000 inscriptions made near the headwater of the Indus River. And each year, between 2,000 and 3,000 old engravings are newly discovered, according to his most recent count. Back home in Germany, in a former carriage house within sight of Heidelberg Castle, the immense material is neatly ordered and registered.

The only road to China

The first stone images by the Indus River were discovered by Heidelberg ethnologist Karl Jettmar after the remote region was connected to the rest of the world by means of an ambitious road project, the Karakoram Highway.

The only road connecting Pakistan with China, the Karakoram Highway begins north of Islamabad and ends in Kashgar in the western part of the Chinese province of Xinjiang. Along the Khunjerab Pass, which has an altitude of 4,693 meters (15,396 feet), the highway forms the highest paved border crossing in the world.

Hauptmann has been coming to Chilas since 1989. When he first arrived, his house, not far from the bazaar, had neither running water nor electricity. And despite the sweltering heat in summer, he had to make do without a fan or even a refrigerator -- a luxury in this corner of the world.

Much has changed since then, but the electricity supply does sometimes break down -- this is Pakistan, after all. A combustion turbine powered by heavy fuel oil -- hardly environmentally friendly -- today provides Chilas with electricity. A small hydroelectric plant is located next to the generator, but it is rarely used.

But now Pakistan has decided to bring modernity to the headwaters of the Indus River. The plan is to change everything here -- with a giant modernization project as grand as the surrounding scenery. It's a transformation, ordered by no less than President Perez Musharraf -- and all of Pakistan is expected to benefit from it.

Nevertheless, it will also come at a great cost, threatening as it does the most important part of the cultural heritage of the Indus River as well as the future of German archeologist Hauptmann's work in researching the stone writings near Nanga Parbat.