Inside the hidden past of Borobudur life's lessons lie

Jakarta, Indonesia -- Even if most Jakartans have not yet had the opportunity to visit Borobudur's original site in Magelang, Central Java -- most capital city-dwellers have at least heard of or seen images of the almighty Buddhist spectacle. 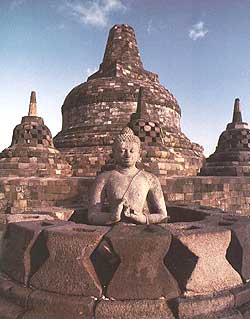 But for those who've never seen anything of the famous temple -- or for those who'd simply like a closer look at some of its hidden secrets, the best of Borobudur is in town with this week's Archaeology Goes to Mall exhibition at Mangga Dua Square.

The inaugural exhibition is an effort to break down the barriers around the world of archaeology and to show why Karmawibhangga, the hidden piece of relief wall inside Borobudur temple, is so important for today's historians.

Every panel of the Karmawibhangga series on display this week depicts how common, every-day people interacted with each other centuries ago.

A trip to Mangga Dua Square to see the panels of Karmawibhangga will also see visitors learn more about the causal law of life -- known as the laws of Karma.

An ancient Sanskrit word for action, Karma is not, as many would believe, a simply system of balancing rewards and punishments.

Karma is a series of consequences of past actions and choices.

With the knowledge that each choice we make in life has a consequence, humans are expected to learn to behave responsibly and of their free will.

The temple was a once-renowned center of excellence on an ancient Asian continent whose people thrived for more than 150 years before being completely abandoned.

And as political and royal power shifted from Central to East Java somewhere in the beginning of the 10th century, a man-made temple like Borobudur was seen as nothing more than a bunch of bricks and stones.

Doesn't it beg the question - what will become of our skyscrapers over the next 200 years?

And what's so special about taking this temple's secrets to the city?

"It is the hidden reliefs of Maha Karmawibhangga that would serve as something special to Jakartans," said Indonesian Sangha Conference exhibition organizer Lenny.

Maha Karmawibhangga consists of finished and unfinished bas-reliefs portraying the daily lives of people living around the 9th century.

For Buddhist, however, it is more than that.

It contains teachings of how life on earth is living example of "what goes around, comes around."

But there is actually a more scientific explanation.

"During its construction process, the soil base shifted as it was not solid enough.

"And presumably the engineers of that time decided to strengthened the base with more stone blocks," he said.

Junus, who spent five years working on the restoration of Borobudur, explained such development was apparent as some joints of stone blocks were broken and some of the Karmawibhangga panels had not been completed.

This, he said, was a sign of changed construction methods which resulted in a terminated work-in-progress.

Visitors to Borobudur temple can see for themselves several Karmawibhangga panels on one corner of the temple -- they were uncovered during Japanese occupation.

The rest however are reproduced images from a book by Dutch archaeologist NJ Krom, first published in 1921, researcher Sonny C. Wibisono said.