Mustang, Nepal -- A treasure trove of Tibetan art and manuscripts uncovered in "sky high" Himalayan caves could be linked to the storybook paradise of Shangri-La, says the team that made the discovery. 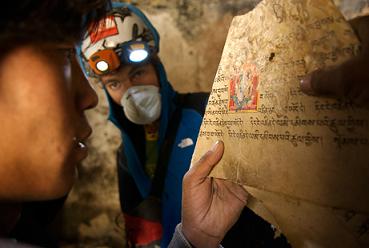 The 15th-century religious texts and wall paintings were found in caves carved into sheer cliffs in the ancient kingdom of Mustang - today part of Nepal.

Few have been able to explore the mysterious caves, since Upper Mustang is a restricted area of Nepal that was long closed to outsiders. Today only a thousand foreigners a year are allowed into the region.

In 2007 a team co-led by U.S. researcher and Himalaya expert Broughton Coburn and veteran mountaineer Pete Athans scaled the crumbling cliffs on a mission to explore the human-made caves.

(Get Coburn's impressions of the challenges of reaching the "Shangri-La" caves in the December/January issue of National Geographic Adventure magazine.)

Inside the caves, the team found ancient Tibetan Buddhist shrines decorated with exquisitely painted murals, including a 55-panel depiction of Buddha's life. (See a picture of one of the Buddhist murals.)

A second expedition in 2008 discovered several 600-year-old human skeletons and recovered reams of precious manuscripts, some with small paintings known as illuminations.