Hyderabad, India -- The state archaeology department has found a limestone statue of Gautam Buddha that dates back to at least 1,800 years. “It was a chance discovery,” said the director of archaeology and museums, Prof. P. Chenna Reddy. 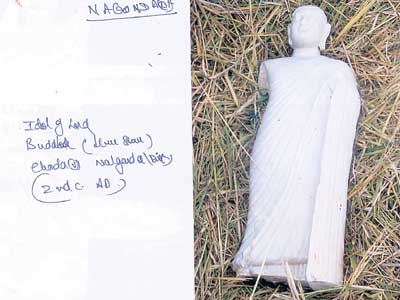 The limestone statue from the second century CE was discovered at Chada village in the Atmakur mandal of Nalgonda district when labourers were tilling the fields. In addition to the idol, Buddhist sculptural panels and a few large bricks were also unearthed.

“The finds reveal the existence of a new Buddhist site in the Telangana region. This evidence adds to the cluster of Buddhist sites in Nalgonda district such as Tirumalagiri, Phanigiri, Gazulabanda, Vardhamanukota, Aravapalli and Nagaram; all located on the banks of Bikkeru. The district is also studded with famous Buddhist sites on the eastern side such as Yeleswaram and Nagarjunakonda,” said Prof. Reddy