Timphu, Bhutan -- Gender inequality took over to blend with spirituality in the second session of the Mountain Echoes festival, which began yesterday at the Tarayana Centre in Thimphu. 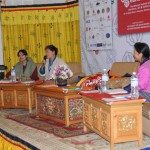 Three women speakers constantly argued and discussed that women have equal spirit to attain the level of spirituality as men, while they referred to religious traditions that underestimated the spirits of women.

The conversation revolved around Buddhist traditions where, at one point, Swati Chopra, who writes on spirituality and its relevance to modern lives, explained the Madhyamika ideology and the middle path teaching, associated with change and impermanence.

According to her, the irrational system that became a tradition blocks change, where women are deprived from certain spiritual teachings, even in Buddhism.

“Change has to be enlightened change, not just jettisoning tradition in entirety, but certain aspects of tradition should be questioned, which unfortunately in India there is less tolerance of questioning tradition,” she said.

Well-known Bhutanese author, Kunzang Choden, said that, while there are beliefs being implanted that a woman would take nine generations to achieve nirvana, there are no such written references so far noticeable.

“Three years ago, a woman asked Jamyang Khyentse rinpoche, if a reference can be found that says so, and rinpoche said he couldn’t find it anywhere,” Kunzang Choden said.

She said the protagonist in her book, The Circle of Karma, is also looking for her spirit, and believes she will find this through literacy.  She receives basic teaching from a spiritual master, shaves her head, and wears the robes, but realises that appearance is not everything, and that spirit and appearance don’t go together.

“You can’t just trash tradition, we have to segregate it,” Kunzang Choden said, referring to patriarchal society. “With education, empowerment, opportunities, you begin to question things.”

When a male from among the audience asked how men are responding to empowerment of women efforts, Swati Chopra said, “They dig in their heels, and use tradition as a reason, but women also don’t support women, as a result of internalising tradition; but right now there is nothing to worry about, the wave is still being built.”

“Households prefer male monks for pujas, while they invite nuns only when there are prayers that include fasting,” she said.