Timphu, Bhutan -- Wanderers and pilgrims who have ventured to the top of the mountains of Bhutan have had watchful eyes looking over them for centuries. The peaks of the countries rugged interior are populated by mighty yaks, who these days wander occasionally through the colorful rectangular prayer flags that decorate the mountain ridges, stamped with woodblock prints depicting the Buddha, the Dharma (teachings) and the Sangha (community). 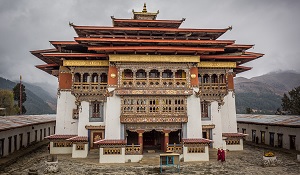 situated on a spur over the glacial Phobjika Valley, is a masterpiece of Buddhist architecture, created by a rural community and maintained by 100 lay monks.
(Courtesy Robert Michael Poole)

Traversing these highlands is essential to reach some of the jewels of the country, and the long journeys are as memorable as the destinations, the rocky mountains passes winding through waterfalls and dense forests, sometimes right on the edge of precipices. Tourists need professional drivers for such exploration, and Amankora has its own modern fleet of vehicles to ensure the journeys are more a taste of adventure rather than endurance.

The journey to the magnificent Gangtey Monastery takes about five hours, a rollercoaster of a ride with regular and spectacular views of the Himalayas either side of the Dochu La Mountain Pass, one of the most hallowed and sacred in the nation. Here, at 3,100 meters, the pass offers clear views to the snow-clad Mt. Masanggang, Bhutan’s highest peak (7,158 meters).

The pass is home to 108 memorial stupas built by Ashi Dorji Wangmo Wangchuk, the eldest Queen Mother. The “Druk Wangyal Chortens” with their distinctive red bands are a memorial to the 108 soldiers who died in December 2003 protecting Bhutan from Assamese insurgents from India. Overlooking the memorial is the small Druk Wangyal Lhakhang temple, constructed for the centenary of the monarchy by King Jigme Singye Wangchuck and containing paintings depicting the history of the country.

But the real treasure lay further east. Gangtey Monastery, situated on a spur over the glacial Phobjika Valley, is a masterpiece of Buddhist architecture, created by a rural community and maintained by 100 lay monks.

The active monastery is hive of activity, where young child monks (srama?eras) learn from their elders and live in housing quarters that surround the main temple. Behind colorful curtains decorated in Buddhist imagery, the monks study dressed in robes dyed deep red, a traditional color for Himalayan Buddhists.

Reached through the age-old village of Gangtey in a region that is still new to electricity, the Monastery features five temples surrounding the main central tower, which houses the tshokhang (hall) built in Tibetan style. It is said that Terton (treasure finder) Pema Lingpa has prophecized about the monastery back in the 1400s, and that sacred treasures (terma) had been hidden here centuries before to avoid their desecration.

A monastic college was first built on the marshy land, with Rigdzin Pema Tinley establishing the first small Lhakhang (monastery) in 1613. It would later be expanded to become a fortress (dzong), by his son Tenzing Legpai Dhendup.

Today Gangtey Monastery feels timeless, where life continues as it has for centuries. Refurbished in 2000 by the entire community, it is constructed from all local materials. Its 104 pillars were all intricately crafted by artisans from the region from blue pine and timber in the nearby forest, guided by the Umze of Lhallung Monastery in Tibet.

The decoration here is detailed and elaborate, filled with motifs and meaning. Diamond thunderbolt motifs appear throughout, carved by daggers around the exterior. Colorful Garuda – a bird creature used as a vessel of Hindu God Vishnu and a common Buddhist bird of intelligence – are depicted in carved decorations on the corners of the outside walls.

Inside images of Buddhas in the style of various regions of India and Tibet feature on the walls, with the Noble Eightfold Path depicted and the wrathful forms of both Vajrapani (the protector and guide of Buddha) and Hayagriva (a nature spirit and “Wisdom King”) on either side.

Besides the vast range of Buddhist iconography that reveals the multi-layered historic culture of the region, Gangtey Monastery also houses a collection of weapons and armory, a contrast to the peaceful surroundings that reminds visitors that even the land of Gross National Happiness has needed to be prepared for war throughout the ages.
TOP