Timphu, Bhutan -- As Bhutan prepares to embrace parliamentary democracy in 2008, it should be cautious about drawing models from western democracy, says a Buddhist scholar from Thailand. 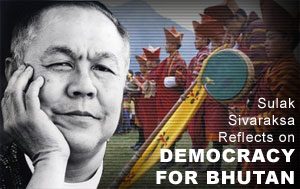 Mr. Ajarn Sulak Sivaraksa, who is a teacher, an activist and a renowned Thai Buddhist scholar, said that he was afraid that Bhutan would use western democracy as a model, a mistake most Asian countries like Burma, Sri Lanka including his own country, Thailand made.

The elections, he emphasised, was one of the very negative sides from the west. Bhutan should instead adopt the Buddhist model of democracy.

The old “sangha model”, he said, which is the oldest Buddhist democracy upholds positive actions, transforms bad habits, purifies negativity, increases virtuous acts and encourages equality and fraternity for all.

Simplicity, modesty and harmony, he said were the key elements in the Buddhist concept. He said that the sangha model was used to run Bhutan some 100 years ago and could still be referred to pull out positive aspects so Bhutan could itself become a model for rest of the world.

“With the western democracy you cannot stop corruption,” he said. “That is evident in the British and American elections which are filled with it.”

The advent of western modernisation in Thailand started a century ago before it came to Bhutan, and he said that his country adopted western democracy at the expense of Buddhism.

Bhutan, he said, was in a very unique situation in that it remained isolated while all its neighbouring countries went through the evils of western modernisation, which gave the country the advantage to learn about both the positive and negative aspects of modernisation and adopt what was good and relevant.

“The country’s policy of allowing few selected tourists is a good example of that,” said Mr. Sulak Sivaraksa, adding that while the country focussed on learning certain things from the tourists, it in turn taught them a great deal about values, tradition, culture and preservation of nature.

“Tourism destroys every country like mine,” he said. “Our local people saw them as wonderful modern people with great spending capacity. They then started aping the tourists and embraced their ways of life.”