Bhutan: Power for the people

Timphu, Bhutan -- Surrounded by alpine mea-dows and snowcapped peaks, the town of Punakha in central Bhutan bears witness to the difficulty of taking a Buddhist Himalayan monarchy into the 21st century. 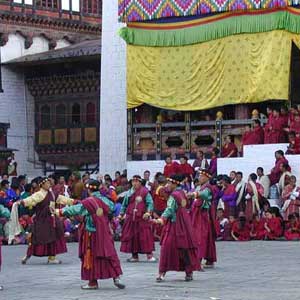 << A folk dance in the streets of Timphu, capital of Bhutan. Is western style democracy suitable for this country?

Inside the 17th-century Tibetan dzong, topped with pagoda-like golden roofs, are 172 civil servants running the affairs of thousands of villagers. Here taxes are collected, new forests planned, telephone lines installed and a watchful eye kept on the “mountain tsunamis” that threaten to burst from melting glaciers and wash away the town -- as happened in 1994.

Yet the dzong is more of a spiritual centre. The corridors are enveloped in incense and prayer chants bounce off the walls. Monks, clad in red robes, outnumber sword-carrying civil servants 10 to one. “It is not a tradition that monks and officials are here together, it is a lack of space. We need to build another dzong but have been a bit busy,” says Dasho Dzongrab Taappo, the deputy head of the district.

Dasho Taappo had been preparing for this week’s mock elections, a dry run of democracy in a country that has only ever been a kingdom. Next year the country’s voters will face parliamentary elections. The shift has been greeted with little joy and much anxiety. Above the town of Wangdue many say they do not want to rule themselves. “It is too early to give power to the people,” says Shep, a farmer. “We are not ready for government. We prefer the king.”

The result has been apathy. Fewer than half the 250 000 registered voters turned out last month in the first round to choose between four imaginary parties identified by a colour representing an ideology. Red was for rapid industrialisation, green for environmentalism, blue for civic sense and yellow for heritage and tradition. Yellow, which also happens to be the colour of the king, won handsomely by 30 000 votes. This week voters were expected to vote en masse for the yellow party, emphatically rejecting the new-fangled ideas of “industrial-led development”.

The reason that King Jigme Singye Wangchuck is finding it so difficult to hand power to the people is the success of hereditary monarchy in preserving Bhutan’s traditions while opening its doors to prosperity.

Bhutan, on the eastern flank of the Himalayas between India and China, is still poor, but its progress has been startling given that serfdom was abolished only in 1956 and the first tarred road appeared just five years later.

In the past 40 years Bhutan has flourished, building free schools and hospitals. Life expectancy has risen from 40 to 66. The literacy rate has soared from 20% in 1992 to almost 60% today. Thanks to hydropower, people are twice as rich as in India. “Bhutan has made extraordinary progress. Of course with progress comes challenges and that is where democracy comes in,” says Nicholas Rosellini, the United Nations resident coordinator in Bhutan.

At first sight the country’s capital looks stuck in a time warp. Traditional dress -- a kimono-style jacket and a kilt -- is compulsory in public places. Buddhist architecture is promoted and big murals of the revered phallus adorn city walls. A policy of extracting $200 a day from visitors ensures fewer people make it to the country than to Antarctica.

But Bhutan is not isolated. English is widely spoken, the internet is uncensored and satellite TV is available. Two private newspapers last year broke the monopoly of the state-owned press. Korean pop stars and United States basketball players have become idols for young Bhutanese. The effect of the outside world on the youth has been dramatic.

To manage outside influences and retain a distinctive Bhutanese identity the king promoted a concept known as Gross National Happiness. This rests on the Buddhist idea that economic growth alone will not bring contentment. The result is that Bhutan ranks 134th in global wealth leagues but is the 13th “most happy” place on the planet. GNH elevates social stability over a rush for growth and has become one of Bhutan’s most notable cultural exports.

However, critics argue that the single­-minded pursuit of happiness has legitimised authoritarian, conservative rule.