THIMPHU, Bhutan -- For years, the remote Himalayan kingdom of Bhutan boasted that it was mostly concerned with Gross National Happiness -- and now it's really going to try to actually measure it. 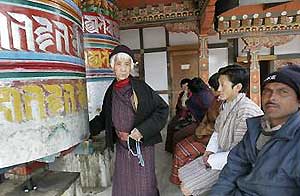 << A Bhutanese woman rolls the Dharma Chakra (the wheel of law) in Thimphu. Officials are looking at ways on calculating just how happy the kingdom's 670,000 people are.

The idea of focussing on Gross National Happiness (GNH) rather than Gross National Product (GNP) was the brainchild of ex-king Jigme Singye Wangchuck, who sought to steer Bhutan into the modern world while preserving its unique identity.

Now with the pressures of globalisation and materialism mounting, and the tiny country set for its first-ever elections Monday, officials are looking at calculating just how happy the kingdom's 670,000 people are.

"We may call it the Bhutan Development Index, or GNH Index," said Karma Tshiteem, the head of Bhutan's planning commission -- which was earlier this year renamed the Gross National Happiness Commission.

"It is not antithetical to economic growth, but growth should reflect what people want," Tshiteem said of the GNH concept, which stresses a range of criteria for national well-being.

"Environment, culture and tradition are the aspects that are important to Buddhist people," Tshiteem said in Thimphu, the tiny capital nestled in the hills, which is devoid of high-rise buildings, traffic jams and smog.

Officials said they have already conducted a survey of around 1,000 people and drawn up a list of parameters for being happy -- similar to the development index which is tracked by the United Nations.

"The main purpose of the index is to evaluate whether the plans, policies and programmes of the government conform to the GNH concept," said Phuntsho Rapten of the Centre for Bhutan Studies, which conducted the survey.

"As a Buddhist country, spiritual well-being is important to us," said Rapten, adding the pilot survey revealed 68 percent of Bhutanese could be classed as being happy.

For those who aren't, Tshiteem said the GNH Commission was focussing on poverty reduction in its current 10-year-plan.

"We are aiming to reduce the number of people living on less than a dollar a day from 25 percent of the population to 15 percent," he told AFP.

Monday's polls are being viewed with excitement but also trepidation, as many say they would be happy to leave affairs of state to their immensely popular Oxford-educated king, 27-year-old Jigme Khesar Namgyel Wangchuck.

Although the emergence of a constitutional monarchy will shake up Bhutan's institutions after centuries of absolute royal rule, the leaders of the two parties contesting the polls say they are still committed to the underlying values represented in the GNH concept.

The elections, they say, will be a moment of change -- but probably not the kind of shock the country had when television was allowed less than 10 years ago.

"Our plans will follow the GNH concept. No party is going to challenge the GNH and its four pillars," explained Sangay Ngedup, the leader of the People's Democratic Party.

For observers in Thimphu, the challenge will be shielding Bhutan from what is seen here as the more negative aspects of growth being faced by mammoth neighbours India and China -- social upheaval, delinquency, rampant materialism and the steady erosion of age-old traditions.

Bhutan, about the size of Switzerland, had no roads, telephones or currency until the 1960s.

The landlocked country was never colonised and for centuries the Bhutanese relished their independence and isolation from the outside world, maintaining a barter economy and allowing few foreigners to visit.

How long that mostly content isolation can hold will be the big issue for whoever wins the elections.

"But Bhutan is not utopia. We are also tempted by materialism."