Timphu, Bhutan -- His Holiness the Je Khenpo awarded certificates to 21 Dzongkha lecturers from the colleges under the royal university of Bhutan (RUB), who completed their master’s degree in Buddhist philosophy. 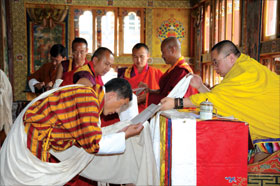 << Due recognition - His Holiness confers certificates

The Tshugla Lopen of Zhung Dratshang said that, even though there were many learned Buddhist philosophers with qualification higher than PhD, there did not exist a system of recognizing their qualification.

“We’ll now follow the international system of recognizing qualified people who are pursuing their studies in Buddhism in our country,” he said. The lopen said that they would start PhD studies in the future for those who have acquired master’s degree to upgrade their qualification.

The two-year master’s course in Dzongkha started in 2006 after RUB put up a proposal to the royal civil service commission (RCSC) in 2004 to provide them with scholars from the Zhung Dratshang for the master’s course.

The lectures were taught by the Khenpo and scholars from the Tango Buddhist college in Thimphu, Sangchen Chokhor in Paro and the institute of language and culture studies (ILCS) in Semtokha.

But their on-campus education was only for a duration of two months in a year during the winter vacation and the rest of the studies, including project work, was done through distance learning from their workplace.