The Making of Buddhist Bhutan's Constitution

Timphu, Bhutan -- The Constitution of the Kingdom of Bhutan came alive on the morning of July 18. As His Majesty the King signed the first copy of the Constitution, using a traditional pen dipped in golden ink, under the gaze of Lord Buddha at the Kunrey of the Trashichhodzong, Bhutanese across the country watched in silence. 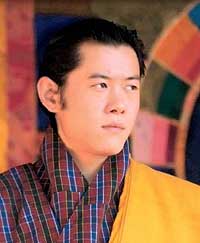 History was being made as the Constitution, mother of all laws, was validated in the highest traditional order, signalling a new era of Bhutanese polity.

“Our constitution is to strengthen the security, safeguard our sovereignty, liberty, freedom, progress of the nation, prosperity of a country, happiness of the people and good governance,” he said.

Making of the Constitution

On September 4, 2001, His Majesty the Fourth Druk Gyalpo, the architect of the Constitution issued a royal decree to draft a written Constitution, according to the chairman.

While His Majesty gave a broad directive, enunciating the basic and progressive democratic principles, Lyonpo Sonam Tobgye said that His Majesty was cognisant of the fact that the members of the drafting committee must be broad-based and that they must be elected so that there will be a voice of the people.

“Consequently His Majesty commanded the Prime Minister to issue a directive to the 20 dzongkhags to elect one member each from every dzongkhag primarily and wholly for the purpose of drafting the constitution,” he said.

These broad-based 39 representatives were involved in drafting the Constitution since the inauguration of its drafting on November 30, 2001 at the Trashichhodzong. The government had 13 representatives, the judiciary three, the dratshang two, and 27 were members directly elected by the people.

Lyonpo Sonam Tobgye said that about 100 constitutions were studied, which was scaled down to 50, in drafting the Constitution. “But emphasis was given to only 22 constitutions and this does not include the royal commands, charters, kashos, kathams, and chatrims that we had in Bhutan so far and even the Chagyig chenmo,” he said.

“The principles of the provisions in the Constitution, especially in the article on Fundamental Rights, were initiated from the various kashos and speeches.”

From November 2001 to October 2003, six special meetings were held and 165 cassettes and 463 pages of the verbatim records were made. During the various meetings, 3,742 interventions were observed, 40 pages of comments on the Constitution from online readers were observed. A notable feature of the drafting process was placing the draft Constitution in the public forum for feedback and comments.

Click here to read the Constitution of the Kingdom of Bhutan

To ensure participation and involvement of the people of Bhutan, copies of the Draft Constitution were widely distributed to the members of dzongkhag yargay tshogdus, gewog targay tshogchungs, Bhutan chamber of commerce and industry, educational institutions, the judiciary, municipal corporations, and civil servants on March 26, 2005.

Unique features of the Constitution

“This constitution was given by the head of the state, the King of Bhutan, who enjoyed the absolute confidence of the people. This is truly unique in the sense of the Buddhist principle of detachment,” he said. Lyonpo Sonam Tobgye said that, while a lot of the provisions in the Constitution were unique to Bhutan, the Constitution of Bhutan was not drafted or given under coercion or compulsion. “The people of Bhutan did not want the Constitution, but His Majesty in his wisdom felt that it was necessary to have one for the benefit of our posterity,” he said.

Pointing out some of the unique features in the Constitution, Lyonpo Sonam Tobgye said that the provision where the Druk Gyalpo has to abdicate and hand over the Throne at the age of 65 was unique. “No other Constitution in the world has a provision that gives the people the right to exercise their powers to amend the provisions of Article 2 through a National Referendum,” he said. “No other constitution in the world has provisions to protect its environment and fix a maximum limit of forest coverage.”

Going by the discussion and interventions, Article 22, Local Governance was the most difficult, said Lyonpo Sonam Tobgye. “We had great difficulties in balancing rightly so the parliament also raised a lot of questions. From an emotional point of view, Article 3, religion, was very sensitive. This was the discussion that took the longest,” he said.

The Constitution of Bhutan is the source of judicial review conferred to the High Court and the Supreme Court. The Constitution provides a mechanism of check and balance among the branches of the government. Lyonpo Sonam Tobgye said that not many Constitutions mention “… it will not use its military force against a foreign state except in self defence, or for the purpose of maintaining its security, territorial integrity and sovereignty.”

What it means to Bhutanese

While many call the Constitution a tribute to the Monarchy, Lyonpo Sonam Tobgye calls it a cycle of 100 years of glorious reign under the Wangchuk dynasty.

“On December 17,1907, it was a social contract that was given to the First King to ensure security and sovereignty of the nation. Under the Wangchuck dynasty, Bhutan had peace, security and the welfare of the people was looked after,” he said.

Asked if the Constitution was the culmination of the transition process, Lyonpo Sonam Tobgye said that the genetic behaviour of the Wangchuck dynasty was very democratic in nature.

“They’d never built palaces with the sweat and tears of the people, they’ve never enriched at the cost of others. They have always promoted religion and welfare of the people. In fact, they’ve forgone their own pleasures and security of the people. Basically, the Wangchuck dynasty has the gene of a democratic nature,” he said.

“Of course our small mind and myopic vision could not comprehend and conceive his visions.”

Last Friday, Lyonpo Sonam Tobgye escorted the Constitution from the Goenkhag, where it was kept overnight to receive blessings, and placed it before the altar of the Kuenrey.

At around 10 am, His Majesty appended his signature against a background of chanting of prayers. The Prime Minster, Lyonchhen Jigmi Y Thinley and members of the parliament signed the constitution as His Majesty stood for more than an hour witnessing the historic event.

“Personally, I’m humbled by the confidence His Majesty the Fourth King has bestowed,” said Lyonpo Sonam Tobgye. “ I hope I was able to justify His Majesty’s confidence and serve the people of Bhutan. It is more of a prayer than of self satisfaction or happiness.”

Meanwhile, for MPs who signed the Constitution on July 18, it was not only a historic occasion, but also a honourable moment.

“As I signed the Constitution, I offered my prayers to let it guide me through my endeavours,” said MP Cheki Wangmo. “I was nervous because of the solemnity of the occasion, but I was excited to be a part of history.”