The pursuit of happiness in a Buddhist vehicle

Timphu, Bhutan -- “Hello, how are you, my darlings?” Sogyal Rinpoche beamed at his audience, many of whom were students and also included Lyonchhoen Jigmi Y Thinley, inside a hall at the YDF complex, Thimphu. 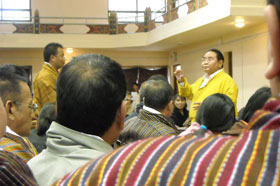 << Sogyal Rinpoche takes a question during the Question hour on sunday

“Buddhism is cool, it’s very cool, and meditation at the highest level is chilling out.” What became immediately noticeable about Sogyal Rinpoche, author of the international bestseller, The Tibetan Book of Living and Dying, was his somewhat funny nature. He joked all the while and continued to refer to his audience as “my darlings”.

But also observable was the warmth and happiness in his eyes. Perhaps, this would have been reassuring to some as he was in Bhutan to talk about how to achieve happiness or inner peace using the Buddhist vehicle.

“What you need to understand isn’t only the outer, but the innermost meaning, which makes Buddhism what it is,” he said. Sogyal Rinpoche began by explaining concepts such as inner peace. “I think this is very much connected with Bhutan’s Gross National Happiness,” he said.

Inner peace may sound lofty and unattainable, reserved for learned monks meditating in a cave for years. But, in fact, the first step towards it was, “very simple: don’t harm others, don’t keep malice, always forgive.”

One of the basic principles of Buddhism is interdependence, the idea that all things are connected. “When you help others, it helps you, when you harm others, it harms you,” he said. Understanding this simple cause and effect process, he said, leads to the next step in Buddhism, the practice of tolerance, non-violence and compassion. This, he repeatedly emphasised, required examining the nature of mind, understanding it and finally “taming” it through meditation.

One of the ways to master this technique was a combination of three methods, what he referred to as, the “unifying practice.” This required gazing at an object of beauty that invoked inspiration and calmed the mind, such as an image of the Buddha or Guru Rinpoche, the sky, a mountain, or even a rock. The other two elements were focusing on the breath or reciting a prayer. Combined, this method, if persisted with, would lead to a calmer and clearer mind and, eventually, inner peace.

Besides providing many more practical meditation techniques, he also translated Buddhist prayers and terminology into English and explained their meanings and purposes.

Throughout his teachings, Sogyal Rinpoche used his tongue in cheek humour to entertain. He frequently teased audience members and made fun of himself. More importantly, he used it to sustain the attention of the audience, especially the youth, whom he was pleased to see in attendance.

He remarked that today’s younger generation in the Himalayan region needed to understand the Dharma in a more practical way. “The offerings, the rituals, some of them are quite putting off as a result of lack of explanation,” he said.

While explaining the concept of emptiness, he noticed some students talking. He gently asked them to keep still. He told them that if they wanted to understand Buddhism, “not only listen with your ears, but with your eyes, your body, your mind and your heart too, then you’ll hear more deeply and not be distracted.”

On the second day of the teachings, Sogyal Rinpoche opened the floor to questions. The first question was on not understanding the Choekyed prayers Bhutanese recited.

Rinpoche answered that change was needed. He said even some monks did not know what they recited. He thought monks firstly needed to educate themselves thoroughly and then become more involved with the community.

They need to come out of the monasteries, he said.

“Can I be frank? Well, even if you don’t want me to, I will. You need to study more, listen to teachings more.”

The Rinpoche, who is also the founder of Rigpa, a network of more than 130 Buddhist centres in 41 countries that presents Buddhism through methods more relevant to modern life, frequently travels the world holding such teachings. Although his visits to Bhutan are infrequent, he said he would come more often as he has received repeated invitations to conduct such teachings.

“I’ll make Bhutan a priority because it’s the only independent Mahayana-Vajrayana nation, it’s a rising nation with such extraordinary promise,” he said.

Rinpoche’s cheerfulness remained constant throughout his teachings. Jigme Dorji, a class 11 Mothitang student, described the teachings as “user-friendly”. Pema Rinzin, a lawyer, said this was his “most fruitful weekend”.

“I wish you all great success, and that Bhutan becomes a peaceful, developed, intelligent, and prosperous nation, but understanding the dharma in a real way is an important and an integral part to the development of Bhutan,” said Rinpoche.
TOP