Recalculating Happiness in a Himalayan Kingdom

Under a new Constitution, government programs must be judged by the happiness they produce, not by the economic benefitsTHIMPHU, Bhutan — If the rest of the world cannot get it right in these unhappy times, this tiny Buddhist kingdom high in the Himalayan mountains says it is working on an answer. 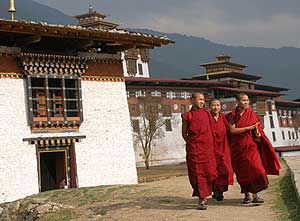 “Greed, insatiable human greed,” said Prime Minister Jigme Thinley of Bhutan, describing what he sees as the cause of today’s economic catastrophe in the world beyond the snow-topped mountains. “What we need is change,” he said in the whitewashed fortress where he works. “We need to think gross national happiness.”

The notion of gross national happiness was the inspiration of the former king, Jigme Singye Wangchuck, in the 1970s as an alternative to the gross national product. Now, the Bhutanese are refining the country’s guiding philosophy into what they see as a new political science, and it has ripened into government policy just when the world may need it, said Kinley Dorji, secretary of information and communications.

“You see what a complete dedication to economic development ends up in,” he said, referring to the global economic crisis. “Industrialized societies have decided now that G.N.P. is a broken promise.”

Under a new Constitution adopted last year, government programs — from agriculture to transportation to foreign trade — must be judged not by the economic benefits they may offer but by the happiness they produce.

The goal is not happiness itself, the prime minister explained, a concept that each person must define for himself. Rather, the government aims to create the conditions for what he called, in an updated version of the American Declaration of Independence, “the pursuit of gross national happiness.”

The Bhutanese have started with an experiment within an experiment, accepting the resignation of the popular king as an absolute monarch and holding the country’s first democratic election a year ago.

The change is part of attaining gross national happiness, Mr. Dorji said. “They resonate well, democracy and G.N.H. Both place responsibility on the individual. Happiness is an individual pursuit and democracy is the empowerment of the individual.”

It was a rare case of a monarch’s unilaterally stepping back from power, and an even rarer case of his doing so against the wishes of his subjects. He gave the throne to his son, Jigme Khesar Namgyel Wangchuck, who was crowned in November in the new role of constitutional monarch without executive power.

Bhutan is, perhaps, an easy place to nimbly rewrite economic rules — a country with one airport and two commercial planes, where the east can only be reached from the west after four days’ travel on mountain roads.

No more than 700,000 people live in the kingdom, squeezed between the world’s two most populous nations, India and China, and its task now is to control and manage the inevitable changes to its way of life. It is a country where cigarettes are banned and television was introduced just 10 years ago, where traditional clothing and architecture are enforced by law and where the capital city has no stoplight and just one traffic officer on duty.

If the world is to take gross national happiness seriously, the Bhutanese concede, they must work out a scheme of definitions and standards that can be quantified and measured by the big players of the world’s economy.

“Once Bhutan said, ‘O.K., here we are with G.N.H.,’ the developed world and the World Bank and the I.M.F. and so on asked, ‘How do you measure it?’ ” Mr. Dorji said, characterizing the reactions of the world’s big economic players. So the Bhutanese produced an intricate model of well-being that features the four pillars, the nine domains and the 72 indicators of happiness.

Specifically, the government has determined that the four pillars of a happy society involve the economy, culture, the environment and good governance. It breaks these into nine domains: psychological well-being, ecology, health, education, culture, living standards, time use, community vitality and good governance, each with its own weighted and unweighted G.N.H. index.

All of this is to be analyzed using the 72 indicators. Under the domain of psychological well-being, for example, indicators include the frequencies of prayer and meditation and of feelings of selfishness, jealousy, calm, compassion, generosity and frustration as well as suicidal thoughts.

“We are even breaking down the time of day: how much time a person spends with family, at work and so on,” Mr. Dorji said.

Mathematical formulas have even been devised to reduce happiness to its tiniest component parts. The G.N.H. index for psychological well-being, for example, includes the following: “One sum of squared distances from cutoffs for four psychological well-being indicators. Here, instead of average the sum of squared distances from cutoffs is calculated because the weights add up to 1 in each dimension.”

This is followed by a set of equations:

Every two years, these indicators are to be reassessed through a nationwide questionnaire, said Karma Tshiteem, secretary of the Gross National Happiness Commission, as he sat in his office at the end of a hard day of work that he said made him happy.

Gross national happiness has a broader application for Bhutan as it races to preserve its identity and culture from the encroachments of the outside world.

“How does a small country like Bhutan handle globalization?” Mr. Dorji asked. “We will survive by being distinct, by being different.”

Bhutan is pitting its four pillars, nine domains and 72 indicators against the 48 channels of Hollywood and Bollywood that have invaded since television was permitted a decade ago.

“Before June 1999 if you asked any young person who is your hero, the inevitable response was, ‘The king,’ ” Mr. Dorji said. “Immediately after that it was David Beckham, and now it’s 50 Cent, the rap artist. Parents are helpless.”

So if G.N.H. may hold the secret of happiness for people suffering from the collapse of financial institutions abroad, it offers something more urgent here in this pristine culture.

“Bhutan’s story today is, in one word, survival,” Mr. Dorji said. “Gross national happiness is survival; how to counter a threat to survival.”
TOP