Thimphu, Bhutan -- His Eminence Dzongsar Jamyang Khentse Rinpoche gave teachings in English on ‘wisdom’ to about 400 Bhutanese devotees in Thimphu from November 20-22. 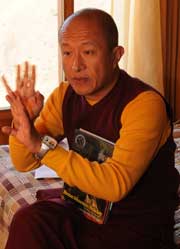 Wisdom is the 9th chapter of the Mahayana Buddhist text, Jangchub Sempai Chenjug (Guide to the Bodhisattva’s Way of Life). The text was written in Sanskrit verse by Gyalshey Zhiwala (Shantideva), a Buddhist monk at Nalanda university in India around 700 A.D.

Wisdom, Rinpoche explained, is a completely natural mind. The nature of wisdom is indestructible and so is emptiness. Emptiness, wisdom, nirvana, enlightenment and mind are synonymous and some of the components of wisdom are generosity, patience and honesty, he said.

Explaining the two kinds of truth in Buddhism, Rinpoche said that ultimate truth is that it does not exist on its own and that itself is emptiness. In relative truth there is existence of six realms: nirvana, etc.

Citing an example of owning a car in a dream, Rinpoche said relative truths are all illusions and therefore life is like a dream but the dreamer does not realise that they are dreaming. Relating the dream of a car, he said, wisdom has a capacity to understand and make sense of life.

Wisdom is within ourselves but we need to recognise it. How do we do so? By listening to essential instructions of the guru and following the vows of bodhisattvas.

Responding to a question by a particpant on the difference between wisdom and intelligence, Rinpoche said intelligence is being clever, smart and having the capacity to understand and memorise things easily, but wisdom has nothing to do with intelligence.

For example, a person, who neither gets hurt while being criticised nor carried away by praise, has wisdom.

Wisdom is also called non-dualistic mind. The cause of suffering is a dualistic mind, which has a tendency to think something is true when it is not.

We do not want suffering, but we are actually attached to the cause of suffering, said Rinpoche. Suffering does not only mean physical pain or misfortune, but also the suffering one has to go through to get money to buy a mobile phone, for instance. Then there is suffering to take care and protect the mobile phone from loss and damage.

Dualistic minds see impermanence as permanent. We care for our body as if it will last forever. We care for our arms with moisturising creams, but how long will it continue? Wisdom is non-dualistic mind, the mind that really sees truth. All phenomena is like a dream and subject to change. Most of us today do not realise this and go on making money. Life is like a dewdrop on the grass, no matter how we try to fight off age. What we need to do is to realise this and be truthful, honest and kind to others, said Rinpoche.

Everything in life is determined by view. Views establish values. Bad views cause war, inflation and disharmony, while good views lead to Buddhahood. Of the nine views in Nyingma traditions, shame and fear of wrongdoing is the foundation of all Buddhist values.

The teaching of the Guide to the Bodhisattva’s Way of Life was started in 2005 on the request of Bhutanese devotees. The ten chapters of the text were completed on November 22. At the conclusion, Rinpoche said his dedication was for the wellbeing of the earth, its beings and the leaders of Bhutan and the Bhutanese.