No Smoking: Monk jailed for three years in Bhutan

By Andrew Buncombe and Omar Waraich, The Independent, 5 March 2011

Timphu, Bhutan -- The Himalayan Kingdom of Bhutan, famed for its unspoilt natural beauty and social policy of gross national happiness, found itself at the centre of bitter controversy yesterday after a Buddhist monk caught carrying tobacco worth under £2 was jailed for three years. 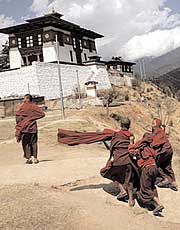 << Monks at a monastery in Thimphu, the capital of Bhutan. The kingdom banned the sale of tobacco in 2005

Sonam Tshering, the first person to be punished under tough new anti-smoking legislation, wept after he learnt of his sentence. "I should be punished, but the penalty could have been lighter," the tearful 23-year-old told reporters. "I wasn't aware about the act,"

Bhutan banned the sale of tobacco in 2005 and tightened its laws last year to combat smuggling, requiring consumers to provide valid customs receipts for cigarettes bought outside the country. The monk was stopped crossing the border back into Bhutan in January carrying 48 packets of chewing tobacco he had bought in India.

In an eight-page ruling handed down by the district court in the capital, Thimphu, judges said the monk was clearly in breach of the Tobacco Control Act of Bhutan 2010 because he had not paid duty for the tobacco. The ruling added: "Ignorance of law is no excuse ... The law represents the popular will of the people."

The sentence, though technically the most lenient for the offence, has triggered a wave of anger within Bhutan. Supporters of Mr Tshering, who have held rallies and organised Facebook pages, argue that the punishment does not fit the crime.

"I think this will adversely affect the image of our country," said Lily Wangchuk, a former diplomat and now director of the Bhutan Media Foundation. "We have a very good reputation right now. We are known for having visionary leadership that has set in place a sensitive and balanced growth, we have gross national happiness, people know us as a land of paradise, a Shangri-La. Personally, I feel that a harsh sentence for such a small crime will get us bad publicity."

Mr Tshering has reportedly already appealed his sentence to the high court, with the assistance of a lawyer organised by Tshering Tobgay, the leader of the political opposition. Mr Tobgay said many people felt aggrieved by the development and hoped the sentence would be overturned and that the legislation itself would be reviewed. "It's very, very harsh. It's not in line with the character of Bhutan which is based on tolerance, compassion and justice."

Bhutan has always been a place apart, an independent kingdom that has only recently opened up to the influence of the West. The first television arrived in 1999 and the country held its first general election in 2008. Until then, it had been an absolute monarchy, ruled for decades by Jigme Singye Wangchuck. That same year, his son, the young, Oxford-educated Jigme Khesar Namgyel Wangchuck, was crowned.

The idea of gross national happiness was developed by Jigme Singye Wangchuck in the 1970s as an alternative to gross domestic product. But some observers have pointed out that Bhutanese society has not been as fair as its image might suggest. In the early 1990s, many thousands of ethnic Nepalese who lived in Bhutan were stripped of their citizenship and forced into exile, apparently in a bid to ensure a homogenous culture. Up to 100,000 refugees were forced to live in camps in Nepal. An international effort remains working to resettle them in third countries.