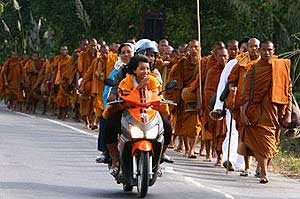 << On the map, Bangladesh's Chittagong Hill Tracts (CHT) region looks like an appendix oddly dangling southeastward from the rest of Bangladesh - and indeed it is a world apart.

At a recent press conference called "Muslim-Buddhist Conflict in Bangladesh: A Call for Peace" held by the Bangladesh Jumma Buddhist Forum at the Foreign Correspondents' Club of Thailand (FCCT), speakers from the organisation explained about the uneasiness in which the region is gripped, and the recent breakdown in the on-and-off peace process.

At the event, the Venerable Phra Dipayan Chakma, president of the Bangladesh Jumma Buddhist Forum Thailand, said that "On February 11, Bengali Muslims tried to forcibly grab a Buddhist cremation place with the help of the Bangladeshi military at Naniaychar sub-district."

These are only the latest in a litany of tragic events that have marred the Chittagong Hill Tracts since 1980, including a long string of murders of Buddhists.

Phra Dipayan accused the Bangladeshi government of attempting to shift the demographic balance by transplanting more than 400,000 Bengali Muslims into the Chittagong Hill Tracts. He said that the scheme is illegal under international law and constitutes a war crime under Article 49 of the Fourth Geneva Convention.

"The Bengali Muslim settlers and Bangladesh military have jointly committed more than one dozen massacres and killed thousands of innocent Jumma Buddhists with total impunity. In addition they have committed arson, land grabbing, rape and looting."

Also in attendance at the conference was HM Raja Tridiv Roy, the former Chakma king. The Chakmas are a Tibeto-Burman people that stand out from the Indo-Aryan Bangladeshis. Roy, whose son is king of the Chakmas, said the government under Prime Minister Sheikh Hasina Wazed is to be commended for attempting to implement the UN-backed Chittagong Hill Tracts Peace Treaty of 1997, "However the situation has not improved. There has been a clear pattern of violence against indigenous people by the security forces. Most of the abuses have not been investigated."

In past decades, the Buddhist Chakmas have rebelled against the central government. The two sides signed the 1997 peace treaty, which guaranteed the indigenous Buddhists the rights that had been promised to them long ago.

The Chittagong Hill Tracts is one of only a few remaining Buddhist regions in South Asia, alongside Bhutan, Sri Lanka and Ladakh.

"We want to amend the constitution to reflect the special status that the Chittagong Hill Tracts has enjoyed since the British period," said the former king to a room of a half dozen journalists who were outnumbered by about two to one by Thai Buddhist monks.

"Buddhists are a minority in Bangladesh. Buddhists in Thailand must help out. It is the duty of a government to protect its people, no matter their religion. Some Muslim countries do not respect other religions. But we live together and die together," said Roy.

Promotional information for the talk stated that "Violence between indigenous Buddhists and Bengali Muslims has plagued the Chittagong Hill Tracts region of Bangladesh for the past 40 years. This situation has drawn comparisons to the southern insurgency in Thailand, where a Muslim minority live in a Buddhist majority."

"According to the 1900 regulation, people who lived outside of the Chittagong Hill Tracts could only enter it for a period of up to 24 hours. The law offered great protection for the Jumma Buddhist people."

At the time of India's independence in 1947, the Chittagong Hill Tracts was 97 per cent Buddhist and two per cent Muslim, which led Phra Dipayan to proclaim that the annexation of the small Buddhist area into East Pakistan, which Bangladesh was then known as, was a "great mistake".

"India's indignation at the award of the Chittagong Hill Tracts to Pakistan may have been a factor in making up Mountbatten's mind to keep the reports to himself till after independence," writes Ziegler.

No matter what form of government may prevail on the Chittagong Hill Tracts, the speakers agreed that pursuing needed change through peace and diplomacy should be a top priority for all sides.