Ramu, Bangladesh -- Thousands of rioters torched Buddhist temples and homes in southeastern Bangladesh Sunday over a photo posted on Facebook deemed offensive to Islam, in a rare attack against the community. 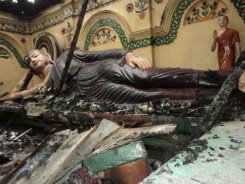 << The burnt Buddhist temple of Shima Bihar in Ramu. Thousands of rioters have torched Buddhist temples and homes in southeastern Bangladesh over a photo posted on Facebook deemed offensive to Islam, in a rare attack against the community.

Officials said the mob comprising some 25,000 people set fire to at least five Buddhist temples and dozens of homes in Ramu town and its adjoining villages, some 350 kilometres (216 miles) from the capital Dhaka.

The rioters claimed the photo allegedly defaming the Koran was uploaded on Facebook by a Buddhist man from the area, district administrator Joinul Bari said.

"They became unruly and attacked Buddhist houses, torching and damaging their temples from midnight to Sunday morning," he told AFP.

"At least 100 houses were damaged. We called in army and border guards to quell the violence," he said, adding that authorities had temporarily banned public gatherings in the area to prevent further clashes.

It was not immediately clear if there were any casualties, and authorities did not say if any of the rioters were arrested.

Witnesses said the rioters left a trail of devastation at the Buddhist villages.

"I have seen 11 wooden temples, two of them 300 years old, torched by the mob. They looted precious items and Buddha statues from the temples. Shops owned by Buddhists were also looted," said Sunil Barua, a local journalist on the scene.

Barua, himself a Buddhist, said 15 Buddhist villages were attacked and more than 100 houses were looted and damaged. "The villages look like as if they were hit by a major cyclone," he told AFP by phone.

Buddhists, who make up less than one percent of Bangladesh's 153 million population, are based mainly in southeastern districts, close to the border with Buddhist-majority Myanmar.

Sectarian tensions have been running high since June when deadly clashes erupted between Buddhists and Muslim Rohingya in Myanmar's western Rakhine state.

Although Bangladesh, where nearly 90 percent people are Muslims, has witnessed deadly clashes between Muslims and Hindus in the past, sectarian clashes involving Buddhists are rare.

In recent weeks tens of thousands of Muslims have hit the street across the country to protest a US-made anti-Islam mocking the prophet Mohammed.