Ramu, Bangladesh -- When Prime Minister Sheikh Hasina visits Ramu today, she can expect to see some happy faces, as the government has rebuilt 19 Buddhist temples that were torched and vandalised in Ramu and Ukhia in September last year. 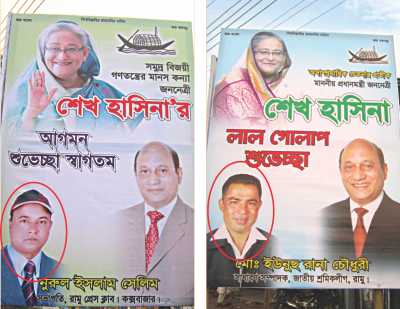 << Banners in Stadium Gate area of #Ramu to welcome Prime Minister Sheikh Hasina carry names and photos of Nurul Islam Selim, president of local Press Club and ex-chief of the upazila unit BCL, and Yunus Rana Chowdhury, general secretary of local Sramik League. Circled red, they are among the 12 persons whom two probe bodies found to have been involved in last year’s attacks on Buddhist community. Photo: Star

But the question remains how safe do the victims feel when the main culprits behind the attacks on the Buddhist community are moving freely.

Ramu’s roads and alleyways are swarmed with huge banners and festoons showing portraits of several of the men, whose involvement in the attacks was confirmed by two probe bodies, to welcome the prime minister.

“The very sight of the main culprits walking free stokes our fears,” Tarun Barua, leader of local Buddhist community and general secretary of Ramu Sima Bihar told The Daily Star on Saturday, nearly a year after the attacks.

Islamist fanatics vandalised and torched Buddhist temples and houses in Ramu and Ukhia of Cox’s Bazar on September 29 and 30 last year, following a fake Facebook post that demeaned the Quran.

The locals, who are still haunted by the horrors of the mayhem, have expressed their gratitude to the prime minister and the administration for the rehabilitation of the victims and reconstruction of the temples.

They say the mayhem ripped apart a communal harmony built over centuries and left a deep wound that would take more time to heal.
“It was more important to get to the bottom of the incident than the rehabilitation of the victims. Otherwise, how such attacks can be stopped?” said Proggamitra Bhikkhu of Sima Bihar.

Pandit Satyapriyo Mahathero, a leader of the Buddhist community, said, “Nothing can make up for the damage and torching of historical and rare objects, the Tripitak and other valuable books on religion.”

Alok Barua, a bank official, told The Daily Star that the peace-loving Buddhists still pass their days in utter insecurity, as the masterminds and instigators of the attacks have not been arrested yet.

The local Buddhist community provided the superintendent of police in Cox’s Bazar with a list of 12 key perpetrators of the attacks, but they are still at large, he said.

The Daily Star has learnt that the names of the 12 persons are on both the lists.

Of them, Nurul Islam Selim, ex-president of Bangladesh Chhatra League Ramu unit, tops the list of the accused prepared by the judicial enquiry team and seconds the other list made by the government body. But he is yet to be arrested.

His photos can be seen in festoons and banners that are hung in Ramu to welcome the prime minister.

However, names of none of the 12 persons were mentioned in the charge sheets of seven of the 19 cases filed for the attacks and looting of the Buddhist temples and houses in Ramu and Ukhia. Police submitted the charge sheets to judicial magistrate courts on Sunday and yesterday.

The rehabilitation and reconstruction of the temples could do little to allay their fears, said many of the victims in Merungloa village of Ramu, where Border Guard Bangladesh built new houses for 15 affected families.

The village witnessed acts of arson, vandalism and looting on September 29 last year.

The miscreants used to hurl brickbats at their houses and lock them from outside just a few months back, but it stopped after they informed police, said one of the victims, asking not to be named.

Suresh Barua, president of Ramu unit of Bangladesh Buddhist Association, was of the opinion that the fear of the victims would not go away unless measures are taken to ensure their safety.

Ramu Kendriya Bouddha Oikya and Kalyan Parishad wrote to the prime minister on August 24 and recommended setting up a permanent administrative cell on security of Buddhist monasteries.

They suggested that the cell should include members of the army and Border Guard Bangladesh and representatives of local administration and the Buddhist community.