Kuakata, Bangladesh -- It was a momentous day for the Rakhaine people in Misripara and nearby villagers in Kuakata. Their beloved temple known as Misripara Seema Buddha Bihar, had been saved. They had feared that the land of the ancient temple might be grabbed by influential people had it not been for the generosity of friends from another land. 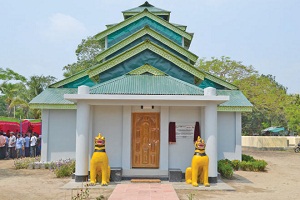 << For the Rakhaine the newly renovated temple has brought a semblance of security.

Over the years, lack of proper maintenance and repair of the temple had left it in a state of decay. Then came two devastating natural disasters - Cyclone Sidr in 2007 and Cyclone Aila in 2009 which battered the temple structure further. But this was not all. Influential locals who were not of Buddhist faith had their eye on the land where the temple resided.

Seventy-two-year-old Asio, who has lived his entire life in the village, says they had land but “frauds took away the land.” For example, he says, frauds paid for five katha of land but made documents of five bighas.

A year ago, the German Ambassador to Bangladesh, Dr Albrecht Conze found the temple in a very bad shape while visiting it with his wife.

“It was raining through the roof, and the site was unprotected,” said Dr Ferdinand von Weyhe, charge d' affairs of the German embassy, while inaugurating the renovated temple on April 2.
“So, we decided to renovate this precious site of worship which stands as a symbol of the multi-religious heritage of Bangladesh,” he added.

Speaking at the opening session, Tobias Becker, country director of GIZ (German cooperation), said the renovation of the temple premises will not only help preserve the country's cultural heritage, but also contribute to the development of the local economy. The German government provided around Tk 34 lakh for the renovation.

The Buddha Bihar, the largest Buddhist temple in Bangladesh, is renowned due to its distinctive architectural design. It is a hundred years old and symbolises the ancient tradition and cultural heritage of traditional Rakhaine people.

The Misripara Seema Buddha Bihar is just four kilometers away from the Kuakata sea beach, located in Patuakhali. One can see both the sunrise and sunset from the panoramic beach which is about 320 kilometres south of the capital and about 70 kilometers from the district headquarters.

In the Buddhist temple there is the statue of Goutom Buddha as well as 200-year-old wells. Visitors will find the over hundred year old lifestyle of the Rakhaines to have been preserved over time.  Near the temple, one can also visit Misripara, Keranipara and Amkholapara and experience the traditional lifestyle of the Rakhaine community. Locally made handicrafts are aplenty and the Rakhaine people who make them are very friendly to visitors.
The name Kuakata originated from the word 'Kua'-the Bengali word for “Well” which was dug on the sea shore by the early Rakhaine settlers in quest of drinking water. These settlers landed on Kuakata coast in the eighteenth century after being expelled from Arakan (Myanmar) by the Mughals. Afterwards, it has become a tradition of digging wells in the neighbourhoods of Rakhaine tribes for water.

The long strip of dark, marbled sand stretches for about 30km. The long and wide beach has a typical natural setting. This sandy beach has gentle slopes into the Bay of Bengal.
On the eastern end of the beach is Gongamati Reserved Forest, an evergreen mangrove forest and snippet of the original Kuakata. When the Rakhaines settled in the area in 1784, Kuakata was part of the larger Sundarbans forest. However, the Sundarbans is now at a distance of one-hour by speed boat.

Kuakata is the place of pilgrimage for both Hindu and Buddhist communities. Innumerable devotees arrive here at the festival of 'Rush Purnima' and 'Maghi Purnima'. On these two occasions the pilgrims take holy baths at the bay and participate in the traditional fairs.

Fisherman village is another place where one can visit and watch the lifestyle of the fisherman. In the fishermen village you will find the fishermen coming back from the sea and you can buy fresh hilsa fish from them, and by the side of village there are some local restaurants where you can get the hilsa cooked and ready for eating.

The government and local business owners have made significant developments over the years to attract tourists to its shores. Nowadays, locals are more supportive to the tourists and communications as well as security have improved significantly.