Hundreds of Buddhist devotees in the Indian north-eastern state of Tripura have paid tribute to the victims of the Paris terror attacks.

Agartala, Bangladesh -- They prayed and lit candles for universal peace and against religious radicalism. 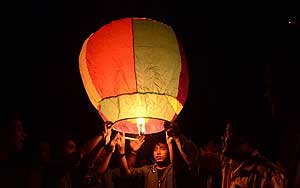 They had congregated at the historical Venuban Bihar, a monastery in Agartala, on Sunday to participate in the 39th state-wide 'Kathin Chibor Dan' festival.

Kathin Chibor Dan - which literally means "offering of the difficult monk robe" -- is an annual religious festival during which Buddhists donate to monks different items required for living the life of a monk, including a cloth robe woven in their own looms.

“We the Buddhists, students, monks and community of the Dharmadipa Foundation have convened to pray for the peace, harmony and safety of the world and for those who have died in the massacre in Paris. We express our solidarity with the departed and pray for their wellbeing,” said Dr Dharmadipa, a monk.

He said that everywhere in the world there is war and fighting in the name of religion, which has been institutionalised and which, void of a universal approach, promotes sectarian violence.

"It should be universal in nature. Compassion and kindness should be the religion of every human being because if you have compassion or kindness you cannot be violent. Once we feel the pain of our fellow humans, we can help each other and establish peace and harmony in the universe.”

The festival is held on any convenient date within one month of the conclusion of the Prabarana Purnima (the full moon of the Hindu month of Aswini), which is the three-month rains retreat season Vassa for the monastic order.

In the night of Prabarana Purnima, the Buddha displayed the miracles of spiritual power to his disciples.

The robe that the Buddhist monks wear is known as ‘chibar’.

Promila Chakma, a devotee, said, “Kathin Chibar Dan is the biggest sacrifice for the almighty. We weave the cloth and donate, along with it, various other items for the monks and for the Lord Buddha.”

However, modern life now often induces devotees to buy the robes and donate them to the monks.

The devotees tie offerings like books, pens, currency notes, and thread onto a "Kalpataru" (wishing tree) with strings and then pray for their wishes to be fulfilled.

Several others walk around the monastery carrying mainly dresses and food items and offer them to the Buddhist monks.

Bishakha, a nurse of the Buddha, introduced the festival about 2,500 years ago.

It marks the conclusion of a three-month seclusion period of monks who meditate inside their monasteries for self-edification and atonement for mankind. It is preceded by another festival, Prabarana Purnima, characterised by the release of paper lanterns.

Through 'Kathin Chibor Dan', Buddhists hope to regain peace for mankind as a whole.

Special prayer sessions in the afternoon seek peace, progress and prosperity of the nation and of mankind.

Buddhism starts with peace and 'ahimsa' (respect towards other beings).