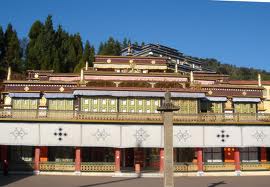 Inside the half-century-old Rumtek monastery, about 24km from Sikkim's capital, the younger monks are talking animatedly, while some snooze on their beddings strewn on the verandah around the main courtyard. Their belongings are piled alongside.

There are deep cracks in the two buildings that house classrooms of the Karma Shri Nalanda Institute that's part of this monastery, forcing the young monks to abandon their rooms and shift to this verandah. "Our examinations are scheduled for November and we can't study in the open verandah. There's no knowing when our rooms will be repaired," said Chewang Norbu Bhutia, a student.

This young monk adds that while the February 2006 earthquake that struck Sikkim had caused many cracks in their rooms, this time the columns and beams that support the building have cracked. "It's totally unsafe. Even a mild tremor will bring the two buildings down," he said.

The Centre has constituted an inter-ministerial team to visit Sikkim to take stock of the damage caused by Sunday's devastating earthquake, as hundreds of people, including 40 foreigners, were evacuated and taken to safer places. Union home minister P Chidambaram will visit Sikkim on Thursday to review the rescue ops.