Little to cheer for Chakma refugees in India

Nearly 35,000 Chakmas migrated to Arunachal Pradesh after being persecuted in both Bangladesh and Pakistan. However, Chakma refugees have no rights in India and are unable to vote or call themselves citizens.

Arunachal Pradesh, India -- Villagers in Diyun, a farming hamlet in India's remote northeast state of Arunachal Pradesh, wake up to the crack of dawn. They peep out of their huts and look at the sky. With clear weather, they set out for work. 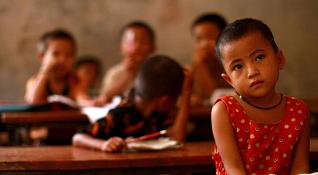 It's just another routine day for the villagers -- tilling on their farms and running household chores. Not many are aware of the fact that it is World Refugee Day. That's ironic because 80 percent of this village, which houses 500 families, belongs to a refugee community, the Chakmas.

Since 2001, the United Nations High Commissioner for Refugees (UNHCR) has marked World Refugee Day on June 20 to draw attention to the plight of all those forced to leave home. According to the UN refugee agency, there are 42.5 million refugees in the world. The Chakmas of Arunachal Pradesh make up only a tiny percentage of that figure -- which is perhaps the reason why their story is forgotten.

According to the East-West Center Washington, about 100,000 Chakmas, a tribal group from the Chittagong Hill Tracts of Bangladesh, fled erstwhile East Pakistan between 1964 and 1969 for two reasons -- communal violence and displacement.

A minority Buddhist tribe, they faced oppression on grounds of religion and ethnicity at the hands of the East Pakistan government. (Religious and ethnic persecution of tribal groups in the Chittagong Hill Tracts continues to this day.) Secondly, the construction of the Kaptai hydroelectric dam rendered many thousands of Chakmas landless.

As a result, 35,000 Chakmas migrated to Arunachal Pradesh that borders China and Myanmar. Hemantolal Chakma's family was among those who left in search of refuge. The 48-year-old farmer from Diyun was a toddler when he undertook the arduous journey.

"I don't remember anything from those days. But my mother and father told me that it was very tough. Our land had submerged under water because of the dam. We were stranded without any possessions and had to leave. We entered India through Mizoram and settled here in Arunachal Pradesh. I hear it was very difficult in those days. No food to eat, no shelter," he says.

Hemantolal lives with his wife in a thatched hut. There's no furniture in their dimly-lit home. One corner of their single-room hut functions as a kitchen and another as sleeping area. "This is how a poor person's house looks," he apologizes.

Although he's lived most of his life within these four walls, Hemantolal doesn't feel at home here. "It's a sorry state of affairs. I don't have any rights in this place. I can't vote, I can't call myself a citizen," he explains.

Like Hemantolal, most Chakmas in Arunachal Pradesh have been denied Indian citizenship or refugee status despite having migrated legally, with valid migration certificates issued by the government of India. Moreover, after signing an agreement with Bangladesh in 1972, the government of India accepted all responsibility for the Chakmas who migrated before March 1971.

Twenty years later, the central government declared that the Chakmas have a legitimate claim to Indian citizenship. However, in April 2004, the state government granted voting rights only to 1,500 Chakmas, leaving 50-60,000 of them still stranded.

Apart from the lack of legal rights, the Chakmas also face discrimination on a daily basis. Sanjay Chakma, 35, who was born in India, regrets belonging to his tribe. "Sometimes I am sad that I was born a Chakma. I wonder why I am one. The other tribes in the region view us with such disdain. We are humans too, but we are denied the rights of humans," he says.

Sanjay says that many of his friends and acquaintances have been assaulted in broad daylight by members of other tribes. "You will hear cases of Chakmas being beaten up in public places. There is an image of Chakmas being criminals, doing wrong things. There's not always an element of truth in it. We don't get respect at work place. We have no other option but to endure how we are treated," he says.

The South Asia Human Rights Documentation Centre (SAHRDC) has not only accused the state government of Arunachal Pradesh of human rights abuses against the Chakmas but also of denying educational and employment opportunities to them.

"In September 1994 the Government began a campaign of school closings, burnings, and relocations which has effectively denied the Chakmas their right to education under international law," the SAHDRC says. Even today, studies point out that schools in Chakma-dominated areas have an abysmal student-teacher ratio of 300:1.

Sanjay lives with his wife and three kids. Five-month-old Joshua is Sanjay's youngest son. It's a lazy afternoon and Joshua is crawling on the floor. Sanjay points to him worriedly and says he isn't sure of what his son's future has in store. "I haven't been able to get a birth certificate for him. The authorities make it very difficult to legally register newborn Chakmas," he says.

Sanjay claims to have made repeated rounds to the local registration office in Diyun district to acquire a birth certificate for Joshua. "There are two days in the week to register for birth certificates. Every time I went to the office on these days, they would send me back and ask me to return again. After many attempts, I got tired of it," he says.

Sanjay thinks it is a deliberate attempt by the state government to deny the Chakmas an identity. "Most of us have no proof that we exist. Isn't it easy to erase records that never existed?" he says, adding, "I'm surprised you know about us. Nobody has bothered to find out."

Members belonging to other tribes in the region accuse Chakmas of criminal activities. Shivumso Chikro, who belongs to the Mishmi tribe, is an assistant professor of history at a college in the state's capital of Itanagar. He believes that the Chakmas should have legal rights but also expresses his apprehensions.

"The Chakmas are involved in a lot of criminal activities. They have expanded their territories. They have taken over land that belongs to other tribes and inhabited them. They should live in the land that has been allotted to them and not take over other people's land," Shivumso says.

He goes on to cite a close encounter: "Where my grandmother lives, there are also some Chakmas residing. One night she got looted by some Chakma miscreants who took away her traditional silver jewelry and everything she had. How do you justify that?" he asks, agitated.

The state government of Arunachal Pradesh seems to share Shivumso's fears. An academic paper published in 1996 says: "The government officially notes the Chakmas' 'propensity towards crimes and other anti-social activities.'

The Chakmas are still hopeful of a better future. Two years ago, a parliamentary committee set up by the Indian government vowed to look into their citizenship issue. Bimal Kanthi Chakma, an executive member of the Committee for Citizenship Rights of Chakmas of Arunachal Pradesh (CCRCAP), says they are now in negotiations with the state and central governments.

"I hope that the dialogue will be fruitful. Right now only a very few of us have voting rights. But this right has to cover many more people. We are also fighting to have the right to contest elections here," Bimal Kanthi says. He refrains from sharing more thoughts on the issue, fearing it will affect the outcome of the negotiations.

On being asked by Al Jazeera what progress had been made on the Chakma citizenship issue in the past 60 years, the state government gave no comments. It therefore remains unclear when the negotiations will have an outcome that will decide the fate of thousands of Chakmas.

As part of its World Refugee Day project, the UNHCR is running a campaign titled "No one chooses to be a refugee". The Chakmas in Arunachal Pradesh know little about the campaign, but there's no doubt that it matches their sentiment.