Shimla, India -- Tabo, an ancient seat of Buddhist religion and culture in picturesque Spiti Valley in Himachal Pradesh in northern India, will now have an international learning centre. 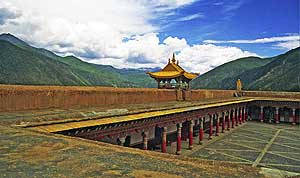 Baudh Darshan, which will help preserve the ancient seat of Buddhist studies, will be set up at Tabo with a funding of Rs.45 crore by the central government. Founded in 996 AD, Tabo, known for a more than 1,000-year-old cave Buddhist monastery, is located at an altitude of 3,050 metres and 375 km from Shimla. It is also called the ‘Ajanta of the Himalayas’.

Chief Minister Virbhadra Singh, who took up the issue with former prime minister Manmohan Singh, said the proposed centre would help preserve and expand Buddhists studies. He said around 30 acres of land at Mohal Dhaang Chummi has been approved for the centre. Necessary clearances from the state forest department is expected to follow.

“The land will soon be transferred to the union ministry of culture for building the institute. The entire project cost of Rs.45 crore will be borne by the Indian government,” Virbhadra Singh told IANS. “The institute will attract not only scholars from India but from across the globe,” the chief minister said.

Protected by the Archaeological Survey of India, Tabo is one of the largest monastic complexes in India, with several caves and contemporary structures. It attracts thousands of scholars and researchers from all over the world. It is the second most visited tourist place in the Buddhist circuit in India after Bodh Gaya, the birthplace of Buddhism where Gautam Buddha attained enlightenment over 2,500 years ago.

Spiti Valley, where the Tabo monastery is located, is a cold desert dotted by tiny helmets spread over the Himalayan peaks. It adjoins Tibet. A century ago, Rudyard Kipling in his novel “Kim” described Spiti as “a world within a world” and a “place where god lives”. Things have hardly changed there.

Not accessible by road throughout the year, the Spiti Valley remains cut off from the world for more than four months a year due to heavy snowfall. It reopens once the snow starts thawing after mid-April. Perched at 3,370 metres, Dhankar, 24 km from Kaza, the headquarters of Spiti, and some 320 km from Shimla, is another repository of the ancient Buddhist culture. It was once the castle of Spiti’s ruler – the Nono.

Another centuries-old Buddhist shrine, the Key monastery, is located 12 km from Kaza and at an altitude of 4,116 m. The monastery has rare collections of thangkhas, or Tibetan paintings, and ancient musical instruments like trumpets, cymbals and drums. Its library holds the manuscripts of the Tangyur texts.

Geu, a village on the Indo-Tibetan border in the Spiti Valley, is known for a 550-year-old mummified body of a monk. The mummy was found by the Indo-Tibetan Border Police (ITBP) after an earthquake that hit the region in 1975. It was discovered from one of the eight stupas. Even the teeth, nails and hair on the skull are intact.

Tibetan spiritual leader the Dalai Lama often says in his addresses that more than 1,000 years ago Buddhism was introduced to Tibet from India. Buddhism became rooted in Tibet from the seventh to the 11th century, thus deeply influencing Tibetan worldview.