Talk on the Philosophy of Science and Buddhist Philosophy

Dharamshala, India -- Dr. Rajendra Priyadarshi, a physicist and student of Nobel laureate, the late Prof. Heisenberg, gave an hour-long talk on the "Philosophy of Science and Buddhist Philosophy" last Monday at the Gangkyi mess hall. 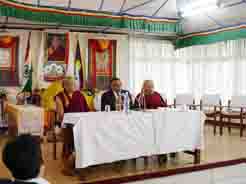 The talk was organised jointly by the Kashag Secretariat and the Library of Tibetan Works and Archives. Kalon Tripa Prof. Samdong Rinpoche gave a brief introduction of Dr. Rajendra Priyadarshi before the talk.

During the talk, he emphasised the connectivity between science and spirituality. He said that the scientists do not have any nodding acquaintance with Buddhism when the theory of emptiness, which already exist in Buddhism, was discovered. Likewise there are many other theories common in both science and Buddhism.

Present at the talk were philosophy students, academicians and staff of the Central Tibetan Administration.

Geshe Lhakdor, director of the Library of Tibetan Works and Archives proposed a word of thank at the end and presented a book on Buddhism and Science to Dr. Priyadarshi.