AMARAVATI, Andhra Pradesh (India) -- Buddhist spiritual leader Dalai Lama on Thursday asserted that the shape of Tibet in the political map of the world would much depend on the efforts of the people living there. 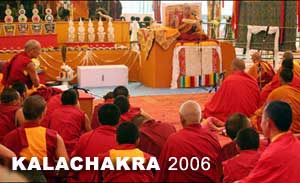 Performing Kalachakra rituals here on Thursday, he said the real disciples are those that reside in Tibet and get initiation.

The people living in Tibet are underprivileged in their motherland as those of Tibetan origin residing in India are, in fact fortunate, he said.

There is hardly any family, which is not affected by tragedy and sorrow in Tibet. However, despite the difficult circumstances Tibetans as a race continue to thrive because of their spirit and enthusiasm. Such Tibetans will reach the fruits of Kalachakra initiation here, the Dalai Lama thundered.

“Buddhism as an ideology helps transformation of mind. It teaches compassion for all human beings,” he said and advised the monks to redress the suffering of the people. Sufferings of human beings can be eliminated by wisdom, he observed.

The Buddhists obtains enlightment for the sake of the whole humanity.