DHARAMSALA, India -- Time, Tibetan exiles fear, is running out. As the Dalai Lama ages, their dreams of returning to a free Tibet are slowly being crushed by a realization that they face a long bleak period without an international icon to plead their case before the world and keep them united. 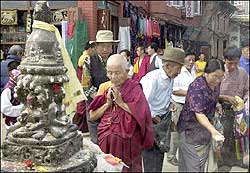 << What holds for Tibet after the Dalai Lama?

Since fleeing into exile in India in 1959 after a failed uprising against Chinese rule, the Tibetan spiritual leader has personified his Himalayan nation's struggle for self-determination.

He turned 71 on July 6, and while generally considered to be in good health, the globe-trotting holy man was grounded by his doctors a day before his birthday because of exhaustion and canceled all his engagements for a month.

A second fear also haunts the exiles. If they do achieve their goal, will the Tibet they knew still be there for them to return to?

This month, China realized its decades-old ambition of linking Tibet to Beijing by train, heightening Tibetan concerns that Beijing is trying to crush Tibetan culture by swamping it with Han, the majority Chinese ethnic group.

Another worry is that the Dalai Lama's nonviolent philosophy, which won him the 1989 Nobel Peace Prize, may die with him, possibly triggering a return to arms that most agree would be doomed to fail.

For now, the Dalai Lama's influence is paramount, among the exiles as well as deep inside Tibet, even though his teachings and even his portrait are banned there.

Nearly every day, Tibetans arrive in India after crossing the Himalayas to join the exiles in Dharamsala, where the Dalai Lama's government-in-exile is based.

Tenzin, 21, recently journeyed with two friends for 41 days over Himalayan peaks, passing through Nepal to reach Dharamsala and be near the Dalai Lama.

"I miss my family and the lands of Tibet, but His Holiness is in India," explained Tenzin, who wouldn't give his full name, fearing his relatives would be persecuted.

Even with such devotion, many Tibetans are tentative about the Dalai Lama's "Middle Way" of working peacefully with China and settling for autonomy rather than independence.

"Every (Tibetan) is divided within themselves, split between their loyalty to His Holiness and a desire for freedom and dignity," said Lhasang Tsering, a one-time member of the Tibetan government in exile who broke with the leadership when it gave up on independence.

Only the spiritual leader's moral authority has convinced Tibetans to go along with the plan, many here say, and the exile leadership is well aware of this.

"If His Holiness is not on the scene and one day the Chinese wake up and give their consent (to the autonomy plan), this will not be binding on the Tibetan people," said Thubten Samphal, spokesman for the exile leadership.

"We have been telling the Chinese that it is wrong to play a waiting game," Samphal said in his Dharamsala office.

But that's what many believe the Chinese are doing.

"The Chinese just don't want to deal with the Dalai Lama. They feel they have an unassailable position," said John Power, a Tibet expert at the Australian National University in Canberra.

"They can just wait until he dies and set their own terms," he said, adding that recent talks may simply be a way to assuage international opinion.

This month, Tibet's Chinese-appointed leader, Champa Phuntsok, described the Dalai Lama as a threat to China's security and unity. While the Tibetan leadership described its envoys' talks with Beijing as "fruitful," Phuntsok said they made "no substantial progress."

Once the Dalai Lama is gone, the succession will be dictated by the rites and timetables of Tibetan Buddhism.

His successor will be a boy born after his death, someone chosen by Buddhist monks who believe him to be the Dalai Lama's reincarnation. That means decades may pass before the new Dalai Lama is ready to assume the leadership.

And normal measures to ensure the community has strong leadership in the intervening years are also beset by problems.

In 1995 the Dalai Lama chose a 6-year-old boy as the new Panchen Lama, the No. 2 figure in Tibetan Buddhism, who traditionally guides whoever becomes the next Dalai Lama. China promptly put the boy under house arrest and he has not been seen since.

Six months later, it appointed its own Panchen Lama, then 5, and pressured Buddhists to accept him. To prevent China from anointing a successor after his death, the Dalai Lama has said he will be reincarnated in exile.

Born Lhamo Dhondrub, the future spiritual leader was recognized at age 2 as the reincarnation of the 13th Dalai Lama and enthroned before he turned 4. He assumed full powers at age 15, in the year that troops of Mao Zedong's newly founded communist republic entered Tibet and crushed its small army.

It was only at the Dalai Lama's insistence that Tibetans gave up their armed struggle in 1973, and some fear that after he dies, a small radical element could return to violence, though a large-scale uprising is highly unlikely and almost certainly unwinnable. "There are more Chinese soldiers than there are Tibetans," said Power.

"Some committed suicide rather than surrender to the Chinese, but we could not disobey the Dalai Lama," said Tsering, who fought in the insurgency and who now runs a small bookshop in the shadow of the snowcapped Himalayan foothills.

The idea of fighting back appeals to many young Tibetans.

"I would have joined the fighters," said Tenzin Tsundue, 31, a leading Tibet activist who spent three months in a Chinese jail in 1997 after sneaking into Tibet from India.

But even he acknowledged the Tibetans will be more successful in the court of public opinion than on the battleground.

Tibet's history is steeped in dispute. Beijing says it has been Chinese territory for centuries, but Tibet was effectively independent for centuries. That ended in 1950 when communist troops arrived.

Thousands of Tibetan monasteries, temples and religious texts were destroyed during the violent Cultural Revolution of 1966-76.

China denies this, saying ethnic Tibetans still make up more than 90 percent of the population, and that projects such as the US$4.2 billion (euro3.3 billion) railroad to Lhasa, the 12,000-foot-high (3,600-meter-high) capital of Tibet, are meant to spread the benefits of China's booming economy. Tibetans say the proportion of Han is much bigger.

"Time is running out," said Tsering, tears filling his eyes. "Every day more and more Chinese are moving in and soon it will all be over."