In the Himalayas, a former Buddhist kingdom struggles to retain its identity 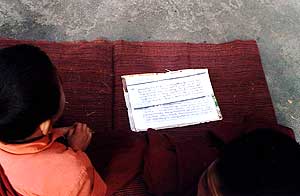 But listen closely, and the present day reality of this former Himalayan kingdom is clearly audible — a Bollywood show tune being hummed by a young, red-robbed monk between his prayers.

More than a century of foreign domination — first by Britain and now by India — has left the Buddhist natives of this mountainous land vastly outnumbered, their way of life overwhelmed by the vibrant culture of northern India's plains.

It's a story played out over the past century across the Himalayas, from Tibet, conquered by China in 1951, to largely forgotten realms like Sikkim, absorbed by India in 1975.

Fantasized as exotic Shangri-La's, a patchwork of once flourishing Buddhist kingdoms that dominated the Earth's highest peaks for centuries find themselves ruled from faraway capitals and inundated by outsiders, their cultures marginalized in a world fast developing around them.

"The plainsmen have money for temples, their own television, movies," said monk Kayzang Chhophel, 53, referring to Hindus from other parts of India.

From his spot in Enchey's courtyard, the icy peak of Mount Kanchenjunga, the world's third-highest at 28,000 feet (8,400 meters) and sacred to Sikkimese, rises in the distance.

All around, the bustling morning routine at Enchey, with its pagoda-like yellow roof and sweeping views of the snowcapped Himalayas, is a fraying oasis against the melancholy that seems to have overtaken Sikkim's Buddhists.

Chhophel glanced at the young shaven-headed novices sitting cross-legged as a lama led them in prayer and at an old monk lighting yak butter candles. But he saw few reasons for optimism.

The reason for his gloom is just a few miles (several kilometers) away in Gangtok, Sikkim's congested capital. Hindu temples dot the streets, and images of Bollywood stars hawking soft drinks and electronics are as common as strings of red, white, yellow and blue Buddhist prayer flags. 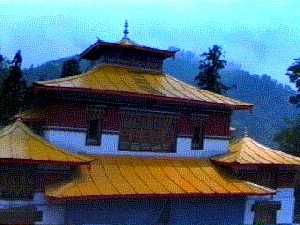 The decline in old Sikkim is seen at monasteries that can't afford to repair cracked walls or leaky roofs and at restaurants where menus list Nepali and Indian dishes rather than Sikkimese delicacies like ferns sauteed with cheese.

A glance at the numbers fills out the picture: Buddhists, the Bhutia and Lepcha ethnic groups, account for only 23 percent of Sikkim's 500,000 people, a total smaller than that of many small Indian towns.

Wedged between Nepal, China and the rest of India, Sikkim never garnered much attention from the outside world. Its brief moment of international notice came in 1962 when its then-monarch, Chogyal Palden Thondul Namgyal, married an American debutante, Hope Cooke.

But the king is long gone, Cooke ended up writing a walking tour guidebook for New York, and Sikkim is best known these days for its trekking opportunities — a land so mountainous that peaks under 20,000 feet (6,000 meters) seldom warrant names.

Even decades ago, Cooke saw Sikkim's exotic image as part of the problem.

"The Shangri-La concept was dangerous for us," she wrote in her 1980 autobiography. "However small and semi-exotic we might be, we were real, we existed. If people didn't credit us with reality, we would perish very soon, the victim of very real power politics."

In many ways, though, Sikkim fell victim to power politics long before Cooke's arrival.

The British made it a protectorate in the late 19th century as they secured their grip on the subcontinent. The first colonial officials found a land so isolated and undeveloped that they ended up importing everything from dairy cows to blacksmiths.

They also began bringing in ethnic Nepali laborers, who by the beginning of the century had become the majority, displacing the Bhutia and Lepcha, who are culturally, ethnically and religiously more closely related to Tibetans.

The 1962 border war between China and India — which already had taken over Sikkim's defense and foreign affairs from Britain — was another blow, cutting Sikkim off from Tibet.

For many Sikkimese, the final tragedy came in 1973 when India intervened to restore order after ethnic Nepalis rioted against the king and landowning monasteries.

Two years later, the king was deposed and Sikkim made an Indian state, a move that remains the source of much bitterness.

Privately, many Sikkimese condemn the Indian takeover in harsh words — "a nation of thieves and liars," is how one member of the former royal family described India.

It's a sentiment few express publicly. While dissent is widely tolerated in India, authorities are less receptive to separatist talk, especially in strategically sensitive regions such as Sikkim, which borders China.

"All over the world there are endangered species. Maybe we need to be declared endangered peoples," Tseten Tashi Bhutia, a politician who leads the Sikkim Bhutia-Lepcha Apex Committee, which has taken up the ethnic identity cause in recent years.
Today in Asia - Pacific
Taliban and allies tighten grip in north of Pakistan
Rights group urges China to end curbs on lawyers
In wake of tsunami, democracy arrives in Aceh
Click here to find out more!

B.B. Gooroon, a top adviser to the state's chief minister, said the Bhutia and Lepcha have reserved seats in Sikkim's assembly and there are rules against outsiders buying land in Sikkim.

Still, "this is an underdeveloped territory," he said. "We need to access to the resources, the highly skilled people of India, to move ahead."

Asked what types of workers have been brought into to aid Sikkim's development, he said: "Drivers, teachers, waiters."

Walk into one of the shops selling knickknacks to tourists in Gangtok's market and you invariably find someone from far-off parts of India behind the counter.

"I'm here to do business," said Sushil Aggarwal, a 43-year-old shopkeeper from the deserts of Rajasthan in western India, the other side of the country.

Asked about the resentment of native Sikkimese for outsiders, he said: "What does it matter where I am from ... why is my religion important?"

Away from bustle of Gangtok, monasteries like Enchey, with its pitched yellow roof and sweeping views of the snowcapped Himalayas, remain an oasis, of sorts.

But the world cannot be walled out, as the young humming monk reminds a visitor.