New Delhi, India -- Two great projects - the world's tallest Buddha at Kushinagar in UP and the revival of Nalanda University in Bihar - are now on the drawing board and are likely to be taken up in 2007. This may give India a tourist draw card as alluring as the Taj Mahal. 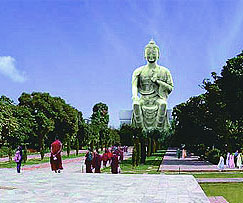 << An artist's impression of the Buddha statue at Kushinagar
One of the four holiest Buddhist sites, Kushinagar near Gorakhpur in UP is where the Lord attained Mahaparinirvana. The other three are at Lumbini on the Nepalese side of the Indian border where he was born, Bodhgaya in Bihar where he attained enlightenment, and Sarnath near Varanasi where he delivered his first sermon.

The Buddha statue project is the brainchild of Maitreya - an international organisation. Its name is derived from Sanskrit, meaning universal love. The aim, the sponsors say, is not just to build a unique statue but "to benefit as many people as possible for as long as possible". The 152 metre (500 feet) high Buddha in the centre of 750 acres of landscaped environs is designed to last at least a 1,000 years. Under the throne of the statue will be buildings, housing temples, exhibitions halls, a museum, library, audio-visual theatre and hospitality services. All around will be beautiful parks with meditation pavilions, fountains, tranquil pools and a collection of sacred art, plus a hospital of international standards and educational facilities. (Maitreya is already providing free education to 500 students at Bodhgaya)

Land for the project has been donated by the UP government which, at last count, had already acquired 40 per cent and the process is on for acquiring the rest. Maitreya and the state government have entered into an agreement to create a Special Development Area extending to 7.5 kilometres around the project where healthcare and educational programmes will be implemented.

Maitreya had originally planned the project at Bodhgaya, but the inordinate delays in decision-making in Bihar compelled it to shift it to Kushinagar. A spokesperson for the organisation told this writer that work on the project will hopefully start in 2007 when the acquired land is handed over.

The Nalanda University initiative was taken by the external affairs ministry as part of a move to re-kindle India's ancient links with east and south Asian countries, by reviving Nalanda as a centre for Buddhist learning. On its part the ministry of tourism and culture consulted the Nava Nalanda Mahavihara, an autonomous body under it. Later, at meetings at the PMO, four key components were identified for a the Nalanda project - setting up an international centre of learning, developing the area around Nalanda, re-development of Bodhgaya and developing the entire area of Nalanda as a cultural corridor or as a centre of cultural tourism. A consultant from the UN World Tourism Organisation was also invited who recommended that a master plan be prepared.

An international seminar on Nalanda-Buddhist cultural links was held in Singapore in November this year. It was jointly organised by the East Asian Institute, Faculty of Arts & Social Sciences and the Institute of South Asian Studies in National University of Singapore. Sanjay Kothari, the new additional director general at the tourism ministry who represented India says, "the participants agreed that it was important to support the establishment of Nalanda University as well as the restoration of key Buddhist holy sites." They suggested, Kothari adds, "That the re-establishment of Nalanda University could be facilitated by linking up various centres of academic excellence and theological institutes in the region." Discussions on the practical aspects of the project will however, continue.

As was to be expected, the revival of Nalanda University has been welcomed by academics and others, although the tourism fraternity has been slow in its response. Fortuitously, FICCI has organised an international conference on positioning India as a hub for Buddhist tourism in the capital on January 25 slated to be inaugurated by minister for tourism and culture, Ambika Soni. In a message, she says she is confident that the conference will encourage public-private partnership in infrastructure creation, improve connectivity and help in discussion of marketing strategies.

Hopefully, FICCI will arrange a session or two on the Maitreya and Nalanda projects to encourage the travel industry to get associated with them at an early stage. One would also expect marketing experts to refer to the opportunities that can be availed of with the re-opening of the trade route along the ancient Silk Road, linking Tibet with Sikkim through the 14,400-foot Nathu La. The pass was opened in July last year and neither the Sikkim government nor the tourism ministry at the center has said a word whether ‘tourism follows trade’ is on their agenda.

We should not forget that it is not only the faithful who wish to visit Buddhist holy sites. There are countless others the world over who are fascinated by Buddha's message of peace. Not all the millions who flock to Bethlehem are Christians.