Fleeing Tibet, through a child's eyes

DHARMSALA, India -- Struggling through knee-deep snow at the roof of the world, Jamyang Samten scrambled behind a boulder when he heard gunshots. Who was shooting? Who had been shot? He had no idea. 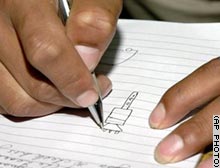 << Tibetan teen Jamyang Samten draws a picture of a cattle prod he alleges was used by Chinese to torture him in prison. "I was exhausted, but I decided that even if I had to crawl I would make it to the border." - Jamyang Samten

But foreign mountaineers camped nearby could see what was happening, and the video they made of Chinese border guards firing at a single-file line of 75 Tibetans wading through a snow-filled Himalayan pass provoked international anger.

While more than half the Tibetans managed to scramble away last September 30 and reach Nepal, a 25-year-old Buddhist nun and a man were killed, and 31 people were detained.

Samten, 15, was among the detainees. He had expected an arduous two- to three-week trek to escape Chinese-ruled Tibet. Instead he endured a five-month odyssey and was threatened with execution should he try to escape again.

The teenager ignored the warning from Chinese authorities on the advice of a Buddhist holy man, who told him he would succeed on his second attempt.

His story, while nearly impossible to verify, echoes other accounts that have filtered out of Tibet, where each year thousands of people who are unable to get passports try to flee Chinese rule and reach Dharmsala, the Indian city that is home to the Dalai Lama, spiritual leader of Tibet's Buddhists and the Tibetan government-in-exile.

China has exercised an often harsh, intrusive rule over Tibet since communist troops marched into the region in 1950.

Beijing has attacked the foundations of Tibetans' identity, their Buddhist faith. It shut down religious institutions in the 1960s and '70s, and, though some have reopened, religion is still controlled. The Dalai Lama, who fled in 1959 following a failed uprising, is vilified.

Free-market reforms have brought a tide of Chinese migrants into Tibet, searching for economic opportunities and making Tibetans feel marginalized in their homeland.

Samten was one of the Tibetans left on the margins.

Raised in a middle-class family, he was 9 when he was kicked out of school for cutting class and sent by his parents to work on an uncle's farm. There, he heard of a relative who had escaped to India, and he began saving money he earned collecting Yarchagumba, a fungus prized as an aphrodisiac in traditional Chinese medicine.

After six years, Samten had about 5,000 yuan ($650). He gave some money to his mother -- whom he did not tell of his plans, fearing she would stop him -- and made his way to the home of another uncle in the Tibetan capital, Lhasa.

The uncle, after first trying to dissuade him, put him in touch with a guide who could lead him through the mountain passes to Nepal.

He met the guide on a clear day in mid-September and climbed into a truck with 75 other people. He had money, clothes and a small bag of yak meat and other food.

The group walked for 11 nights, and Samten's cotton trousers and old sneakers did little to keep him warm. During the day, they slept beside rocks to hide from Chinese patrols.

As they climbed toward the 5,799-meter-high (19,028-foot-high) Nangpa La Pass on September 30, they encountered deep snow. And they stumbled into a group of Chinese border guards.

Half the group, walking farther back, fled when they heard shooting. That group, including Samten, hid behind boulders while their guide went ahead to scout the situation.

They waited for three days until their food ran out. Finally, they made another attempt.

"As we went across, the Chinese guards started shooting near us to frighten us," Samten said. They surrendered and were arrested.

Over the next two months, Samten said he was regularly beaten, shocked and made to do hard labor.

One day, "the policeman told me that I was being released because it was my first arrest for escaping," Samten said. "If I tried again to escape and was caught, I could face execution."

So he returned home, and then went to Lhasa to make a pilgrimage of thanks for his survival.

When he went to see a Buddhist high lama, the holy man told him his escape was divined and that he would succeed if he tried again. His uncle then put Samten in touch with smugglers who knew a shorter -- but more expensive -- route to freedom.

The next journey was even more physically punishing. By the final night, as they traversed a snow-filled pass, the smugglers threw away Samten's only food -- a bag of apples -- saying it would slow them down.

"I was exhausted, but I decided that even if I had to crawl I would make it to the border," he said. "I really believed in the divination. I knew in my heart that I would succeed, and that kept me going."

When they made it across the border into Nepal, Samten was bundled into a car and taken to the Nepalese capital, Katmandu.

A month later, he reached Dharmsala, joining the Dalai Lama and tens of thousands of other Tibetans in exile.