Srinagar, India -- The scenic Kashmir Valley has finally woken up to its lesser known Buddhist legacies to attract tourists from across the world. 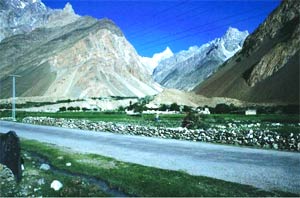 Taking a cue from the central government sponsored "Come to India - Walk with the Buddha" campaign, which targets tourists from Southeast Asia, Kashmir plans to revamp the Buddhist heritage of the valley.

"We have historical links with Buddhism and need to do something to promote its legacies in the valley," Farooq Ahmed Shah, director of the state tourism department, told IANS.

The idea is to open up the centuries-old Buddhist places of worship in the valley to foreign and Indian tourists who throng the Buddhist-dominated region of Ladakh.

"This would not only glorify our past but also give a much-needed fillip to foreign tourism in Kashmir," Shah added.

He said the tourism department would develop a "Buddhist circuit" of Kashmir.
"We have asked the central government to include the Kashmir Valley in its Buddhist tourist circuit."

"The government has earmarked Rs.20 million for the first phase of preservation and developmental plans of two monasteries in Kashmir - at Harwan in Srinagar and at Ushkura in Baramulla," Shah said.

The state had also approached the Archaeological Survey of India (ASI) for the preservation of these Buddhist heritage sites.

Harwan, 20 km from the heart of Srinagar, houses the 3rd century Kushan sites. Located at the bottom of Zabarwan hills towards the northern bank of Dal Lake, it was once a thriving Buddhist centre.

It has also been established that the great Kushan ruler Kanishka had held the Fourth Buddhist Council here in the 1st century AD.

Remains of a monastery and a stupa, though in a state of neglect, can still be seen. Surviving tiles of the ruins display a variety of sculptural and decorative motifs.
Monastic establishments and terracotta artefacts have also been unearthed in Ushkura, known as Haviskapura in ancient times, in north Kashmir's Baramulla district, some 100 km from here.

Similar discoveries were also made at Ambaran Akhnoor in Poonch, over 30 km west of Jammu. Historians believe that Akhnoor was a stopover for Buddhist monks travelling from Patliputra (now Patna) to Takshasila or Taxila (now in Pakistan).

Buddhism at one time flourished in the Kashmir Valley though its imprints are slowly getting wiped away due to apathy on the part of the state and the people. Buddhism, it is believed, had become a dominant religion in Kashmir during the time of emperor Asoka. It is also said that Srinagar, known as Shrinagari in ancient times, was first established by Asoka.

Though Buddhism is said to have entered Ladakh from the Kashmir Valley, the monasteries are well preserved in Ladakh, Zanskar and Kargil while being abandoned in the valley.

The twin districts of Ladakh and Kargil have extensively benefited from religious tourism. Lakadh last year received over 43,000 foreign tourists, according to official figures.
According to a study by the Federation of Indian Chambers of Commerce and Industry (FICCI), about 200,000 Buddhist tourists visit India every year. It estimates that this number could witness a sharp 400 percent rise by 2012 if Buddhist circuits are identified, restored and their infrastructure upgraded.

The study adds that Buddhist tourism could yield India $1 billion annually in the next five years, up from the current $125 million. Shah, a pioneering force behind the revival of Kashmir's tourism sector, said the state had enormous potential to attract heritage tourists.

"We were quite inspired by the FICCI findings," Shah said. "If everything goes as planned, Kashmir might as well benefit from the Buddhist tourist influx," he added.