Leh, Ladakh (India) -- The 800th anniversary of the Drukpa sect was celebrated with a fireworks display and the release of 800 sky lanterns. 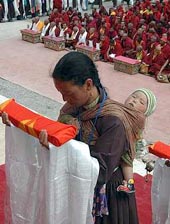 << Rich tradition: A Ladakhi woman following the queue to make her offering to the 12th Gyalwang Drukpa during the 800th anniversary celebration at the Naropa Palace in the valley of Shey, 15km from Leh, Ladakh. – Pictures by HILARY CHIEW / The Star

THE words on everyone’s lips (and mind) were: “It’s sooooo ? hot.” Yet, amazingly, the 200 or so foreign pilgrims participated enthusiastically in a protracted Tibetan Buddhist ceremony at the Himalayan village of Shey, in the Indian Jammu-Kashmir region of Ladakh. The ceremony went on for a week.

Shielding themselves from the scorching summer sun in designer shades, broad-brim hats and caps, shawls and umbrellas – and after liberal applications of sun-block lotion – the faithful followers of the Drukpa sect joined thousands of devotees from all over the mountainous region in paying homage to the reincarnated spiritual leader, the 12th Gyalwang Drukpa.

This time, the celebration had added grandeur – it was the 800th anniversary of the sect that had originated from Namdruk, in western Tibet.

At the Naropa monastery in Shey, 15km from the Ladakh’s administration centre in Leh, the series of ceremonies kicked off with prayers steeped in Vajrayana rituals led by nuns and monks.

Interspersed with sounds of the long trumpets and cymbals, the hypnotic chants of the various mantras by some 300 nuns lasted past midnight on several occasions.

The foreign and local devotees were also treated to the colourful mask dance and lama (monk in Tibetan) dance under fluttering five-hue prayer flags in the open air compound.

Besides foreigners, the fervent devotion to the Rinpoche extends beyond the Ladakhis. Tribes from as far afield as Himachal Pradesh, like the Kinnaurs, came in busloads and even brought along a physical oracle. Rich tradition: The longevity prayer for the 12th Gyalwang Drukpa was steeped in colourful Vajrayana rituals  >>

This “diety” had purportedly been “tamed and converted” from its cannibalistic behaviour after many blessings by the revered spiritual guru. Apparently, despite being Drukpa followers, the Kinnaurs had been sacrificing up to 200 heads of goat annually, to appease the oracle.

One day of the celebrations was dedicated specifically to the longevity prayer ceremony for the bespectacled spiritual master. The highlight of the ceremony was the “sending-off” of a paper effigy of the guru – a decoy of sorts – to confuse the spirits that might otherwise claim his life from the human universe.

Thousands of devotees, garbed in their traditional attire, complete with elaborate head gear, bearing gifts ranging from farm produce to vibrant artificial flowers and the ubiquitous kata (a white or light yellow silk scarf), made a beeline under the hot sun in the arid valley to honour the guru. In return, they were garlanded with the scarf and blessed.

Generous sponsorship from overseas sanghas (congregations) allowed for a 10-minute fireworks display, the release of the symbolic 800 sky-lanterns and 12,000 multi-coloured balloons. All these were first-time events in the impoverished Himalayan region.

Scores of visitors covered the monastery grounds to watch the spectacular shows on two separate evenings. That brought traffic to a standstill – an unheard of phenomenon in the dusty sleepy hollow.

Malaysian Lynne Chiang, a volunteer with the Drukpa Trust, which coordinated some of the events, said less than US$100,000 (RM350,000) was spent on the celebrations. The money was sponsored by about 100 students and friends of His Holiness from Hong Kong, Taiwan, Malaysia, Mexico, Britain, France and the United States.

“We managed to share the happiness and joy with so many people in Ladakh, regardless of religion and backgrounds. We were informed by the army that there were about 186,000 people on the night of the fireworks extravaganza. In fact, many Muslims came and shared in the revelry,” added Chiang.

Due to the historical tension between India and Pakistan in these border regions and especially with the claim over Kashmir, there is strong military presence and surveillance of activities throughout the state.

Chiang, who also goes by her Buddhist name Dipam (meaning lamp), said the anniversary commemoration was mooted last year and His Holiness decided on a 10-year celebration to remind his followers of the urgency to keep alive the lineage that promotes a loving attitude, especially in the troubled times we live in today.

Ladakh – a stronghold of the Drukpa lineage – was chosen as the celebration site as requested by the Ladakhis and preparations started early this year. 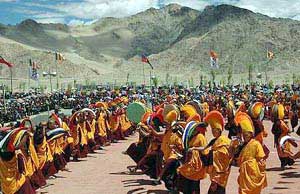 << Devotees of Tibetan Buddhism gather to celebrate 800 years of the Drukpa lineage.

Funds were raised mainly from foreign followers to defray transportation, food and accommodation costs for some 300 nuns coming in from Drukpa nunneries in Darjeeling and Nepal, visiting Rinpoches, some monks and also some of the villagers.

While some elderly pilgrims opted to stay in family-run guesthouses, most of the foreigners were comfortably housed at a nearby campsite that had elevated tent-beds, piped water and bathrooms with flush toilets. Their vegetarian meals were cooked and served by experienced trekking crews.

And if the Tibetan mobile stalls offering all manner of Tibetan goods, from thankas to imitation curios, gemstone jewellery, Free Tibet T-shirts were not attractive enough, there was Leh, with its many pashmina shops, Tibetan souvenirs, restaurants and Internet joints, which offered the pilgrims some diversion and the occasional connection to the outside world.