Leh, Ladakh (India) -- PERSONAL enlightenment through solitary retreats and mantra recitations has always been the cornerstone of Buddhism, but one prominent guru is challenging his followers to expand their horizons by being “Messengers of Love”. 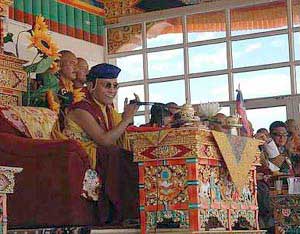 << The 12th reincarnated Gyalwang Drukpa: ‘When natural disasters strike our communities, where are we? When our living environment increasingly faces all kinds of threats, what are we doing to help?’

Born Jigme Pema Wangchen in 1963, the spiritual head of the Drukpa lineage tells devotees: “We do not live in this world independently on our own, and the practice of Bodhicitta essentially requires us to interact with other people and other beings in this universe.

“While we develop our Boddicitta, we should also get ourselves ready to face the world we live in with the love that we have developed through these practices.”

Launching the programme “Live to Love” at the 800th anniversary celebration of the lineage, the 12th reincarnated Gyalwang Drukpa noted that Tibetan Buddhist masters and followers had always been perceived as a closed community that’s uninvolved with communal happenings.

“Some people find formal and serious practices very easy to carry out but when it comes to interacting with others, they are lost and frustrated.

“‘Live to Love’ is an idea which has been in my mind for many years and I hope it will help at least those connected with me and my lineage to open up and share their love with everyone in their respective communities, irrespective of faith, nationality, cultural background and other conditions.

“When natural disasters strike our communities, where are we? When our living environment increasingly faces all kinds of threats, what are we doing to help?” he asked.

He, however, humbly added, “I don’t know if I’ll be successful. I want my followers to love unconditionally, selflessly. Others should do that too, and they don’t have to be my followers”. He also acknowledged that the philosophy of unconditional love is already widely practised by other Buddhist traditions and that the Christians are most notable for their humanitarian work.

Under his leadership, and with financial assistance from many overseas sanghas (congregations), the sect is restoring and upgrading existing monasteries. Top on his list is the Namdruk monastery in Tibet, which was completely destroyed during the Cultural Revolution (1966-76) waged by the Chinese communist party.

Reconstruction began in 1986 on a small part of the original centre and spiritual retreats are being revived, slowly.

To keep practices at the monastery and nunnery alive, there are sponsorship programmes for orphaned young monks, Tibetan refugees and those from poor nomadic families in the remotest parts of the Himalayan.

The status of female practitioners, especially the nuns, has been given a boost, too.

The most celebrated nun of the lineage is possibly the English woman Tenzin Palmo (formerly Diane Perry), who spent 12 years in solitary retreat in a cave high up in the Himalayan mountains. She challenged the institutionalised belief that only males could attain spiritual enlightenment.