Shey, Ladakh (India) -- THERE is more to tradition and Tibetan Buddhism at the Shey Monastery, the focal point of the 800-year celebration of the Drukpa lineage; there is also modernism, in the form of an innovative school. 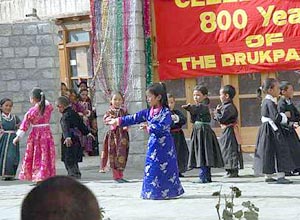 In 1992, the people of Shey had asked for a school that would provide modern education in an environment that would also promote preservation of Ladakh’s unique culture and spiritual needs.

The Druk White Lotus School, the pride of both Ladakh and the Drukpa lineage in the high-altitude Himalayan valley of Shey, has won three international awards for its innovative design, which incorporates energy-efficient features. It was picked the Best Green Building in the World, Best Building in Asia and Best Education Building at the World Architecture Award in 2002.

The buildings face southeast, to harness solar energy and insulate the classrooms against the cold.

As far as possible, local materials were used and indigenous knowledge was incorporated in the modern-looking structures, which can withstand seismic occurrences.

Drukpa Trust vice-chairman Philip Cornwell explained that the stones for the walls were quarried from nearby hills and the roofs were layered with grass and mud, just like the local farmhouses. Timber came from poplar trees, although bigger logs had to be brought in from neighbouring Kashmir.

However, the solar energy tapped is only sufficient to drive the groundwater pumps. The rooms have wide windows and roofs with skylights to let in light.

Toilets are built using the ventilation-improved pit system that eliminates foul smells by cleverly regulating the hot and cold air streams using a wall painted black to generate heat. The faeces collected in the pit is turned into compost, which is then used in the greenhouse to produce fresh greens.

Cornwell said long-term plans include a solar energy farm to collect sufficient energy to power the entire school’s needs – in the residences and laboratories, and for its computers and water-heaters. At present, it still depends on hydroelectricity from grid and diesel-generators.

The masterplan, designed by the 12th Gyalwang Drukpa, takes the form of a traditional mandala.

Mandala is Sanskrit for circle, polygon, community and connection. It is a symbol of man or woman in the world, a support for the meditating person, and is often illustrated as a palace with four gates, facing the four corners of the Earth.

Upon completion of the living quarters (currently, there are two blocks, and three more are in the pipeline), the layout of the school will be in the shape of a key, symbolising the unlocking of the wisdom chest.

The school opened in 2001 with 88 students in both the nursery and kindergarten classes Currently, there are 365 children up to Junior 5 and about 100 of them live in the dormitories. It will have around 780 pupils (aged between three and 18) when it is fully completed in 2011.

For now, the school has reached its halfway mark with the completion of its nursery, infant and junior school courtyards (which include the classrooms and landscaped play area), two residence blocks, a kitchen, dining room and multi-purpose hall, the principal’s house and a central courtyard. A science laboratory, music and arts studio, library, middle school and two more residences are under construction. The next stage will see the construction of the senior secondary block, a sports pavilion and another dining room.

A third residence is scheduled for completion in October. It will house an additional 50 students from nomadic families in the remote areas.

The English-medium school is headed by an experienced educationist from British, who is assisted by18 local teachers and 16 support staff.

Cornwell said as more schools are built by the government, the Druk White Lotus School (dwls.org) will be able to provide education to disadvantaged nomadic children as it has lodging facilities. Students who come from far away usually go home twice a year.

This non-profit school charges a minimal fee and has, to date, secured 100 international sponsorships for both day and residential pupils.