Dharmashala, Himachal Pradesh (India) -- Many residents and environmentalists at Dharamshala are worried over the Tantrik prayer flags of Buddhists "Bon", that are feared to be polluting environment here. 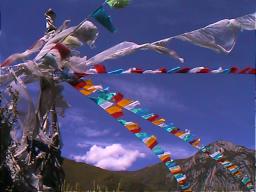 The problem has arisen after the Buddhist priests have started using synthetic flags and strings for performing their rituals.

They are also used for pleasing local deities and spirits of the mountains, valleys, lakes and streams to seek protection against natural disasters and disease. The subsequent rites, with the aim of reckoning the divine, include hanging of the Bon flags over the branches of trees. The flags are then burnt to complete the Tantrik Buddhist rituals.

The environmentalists have observed that when the synthetic material used for flags burns, it causes a lot of air- pollution. The knot tied around the tree, using plastic rope, also hinders tree's growth.

Perturbed with such a practice affecting the environment, residents at Dharamshala have launched a drive to check the plethora of bon flags upsetting the greenery in the region.

Ramesh, a local resident, said: "They (Buddhist) light fire before they start worshipping and then they hang synthetic flags on plastic strings that too very tightly around tender branches of trees. First, the tight knot harms the tree. Secondly, due to heat when the string melts the flags and the string set ablaze, thus polluting the environment. Villagers here keep wandering in forests and unfasten Bon flags."

Residents of Dharamshala say that the religious practices should not be performed at the cost of environment.

Prem, an environmentalist, said: "We understand their (Buddhists') sentiments. But they should also show concern about environment. Some areas should be earmarked where the flags are allowed."

The Tibetan government-in-exile admits the environmental threat posed by the Bon flags and has assured a timely action.

"We will see that in pursuit of our religious practices, we should not harm the nature. We will try to stop the use of plastic flag and will tell our people not to tie flags too tightly over the branches. Paper or cloth flags are biodegradable," said Tsering Phuntsok, Minister of Religion and Culture, Tibetan government-in-exile.

These flags carry images that may be of Lord Buddha, Bodhisattvas, Tara (Goddess of Tantrik sect) animals, lotus, teachers, or some other important entity.

It is believed when the Bon flags brush against air, a positive energy is produced. The energy travels with air and protects all living and non-living beings that are exposed to the air.

Bon doctrine is a vital aspect of Tantrik (sorcery) Buddhism.

Bon, a Tibetan word meaning invocation, is used during fire rituals by Buddhist priests. They perform burial rites as per their age old customs and believe that such incantations tame the demons.

The most common flags have the Ghachenchemon Mantra (hymn of prayer) script contents on them. The literal meaning of this is the 'highest umbrella' that protects its followers.