Dharamsala, India -- Tibetan monasteries and Nunneries based in Dharamsala staged a reproving demonstration march from Tsuglag-Khang to lower Dharamsala condemning the so-called Order no. 5 of China's State Administration of Religious Affairs (SARA) on “Management Measures for the Reincarnation of 'Living Buddhas'” in Tibetan Buddhism. 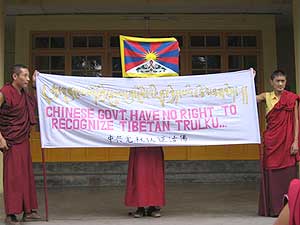 One of the banners reads: “China says ‘Religion is a Poison’ – Why interfere now?”

“Atheist China turning Religious – Believe it or not” says another banner.

A joint statement released by “all the Tibetan Monasteries and Nunneries based in Dharamsala” stated “power to make decisions on any matter related to Tibetan Buddhism legitimately rests with the Tibetan people”.

Addressing the gathering at lower Dharamsala, Ven. Geshe T. Phelgye, member of exile Tibetan Parliament said, “It (the Order) is a new tool deployed by the Chinese Government to undermine Tibetan Buddhism, and to insult and oppress the Tibetan people”.

On September 2, marking the 47th anniversary of the Tibetan Democracy Day; the heads of all the religious schools of Tibetan Buddhism; the monks, nuns, mantra holders and other lay followers of the respective schools and the Department of Religion and Culture of the Central Tibetan Administration collectively issued a statement repudiating the religious bylaw.

The joint official statement was issued by the Kalon (Minister) for Religion and Culture of the Tibetan Government-in-Exile.

However, according to media report, China on Thursday defended its record on religious freedom, saying all Chinese can worship as they choose with no restrictions, and blasted a U.S. government report that said Beijing continues to harshly persecute some believers.

The U.S. State Department said last week in its annual report on religious freedom that China continued to repress Christians, Tibetan Buddhists, Muslim Uighurs and the Falun Gong spiritual group over the past year. It also criticized an apparent crackdown by authorities ahead of the 2008 Beijing Olympics.